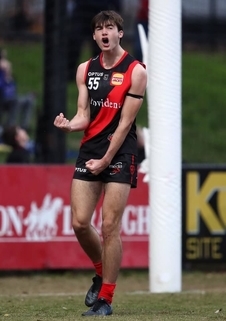 ROUND 2 of the Optus WAFL Premiership Season saw South Fremantle, Claremont and Perth remain undefeated while East Fremantle bounced back impressively and we have quite the exciting talent named the Player of the Round.

It was a fascinating Saturday afternoon of WAFL action in Round 2 and it was East Fremantle who pulled off a 137-point turnaround from a week earlier to see them defeat Peel Thunder 13.9 (87) to 6.9 (45) on home soil at New Choice Homes Park.

Two winners from Round 1 then locked horns at Joondalup's Provident Financial Oval and in a surprisingly dour affair it was South Fremantle that kept its good recent run over West Perth going to win, 5.9 (39) to 4.7 (31).

Claremont backed up its impressive Round 1 win over Subiaco by remaining unbeaten too defeating Swan Districts 13.7 (85) to 7.6 (48) on their home ground at Revo Fitness Stadium in front of the round's biggest crowd of 2276.

Then it was Perth who also improved to 2-0 to start the new season with an encouraging 14.4 (88) to 10.7 (67) victory against East Perth at Lathlain's Mineral Resources Park.

PLAYER OF THE ROUND
Excuse us for having two players from Perth as back-to-back Players of the Round to start the 2020 WAFL season, but Logan McDonald's performance for a second consecutive week to start his career just couldn’t be ignored.

It has been a simply stunning start to the league career for the 18-year-old who originally arrived at the Demons from the Applecross-Mt Pleasant Football Club in the East Fremantle district.

But the exciting young forward is with Perth and he has spent the past two years with the colts for the Demons, but in this extended off-season leading into the 2020 WAFL season, he quite simply banged down the door to make his debut.

Then he got his chance in Round 1 and was remarkable in Perth's victory against Peel Thunder for a teenage debutant. He ended up with three goals in that game form 16 possessions and four marks.

He then showed that it was no fluke this Saturday by producing an even more outstanding performance in Perth's victory against East Perth at Mineral Resources Park.

McDonald set the Demons faithful alight with what was judged a best on ground performance by most in attendance. He finished the game with four goals from 15 possessions and seven marks, and most importantly the Demons won the game by 21 points.

It has been the sort of debut that has set the talent scouts' tongues wagging as he quickly shoots up the draft order to enter the AFL later this year.

But more importantly in the immediate future, he very well could be massively influential in Perth's quest to break their finals drought that dates back to 1997.

If he keeps this form up, there might be no stopping the Demons from finally taking part in that ever elusive first finals campaign this century. 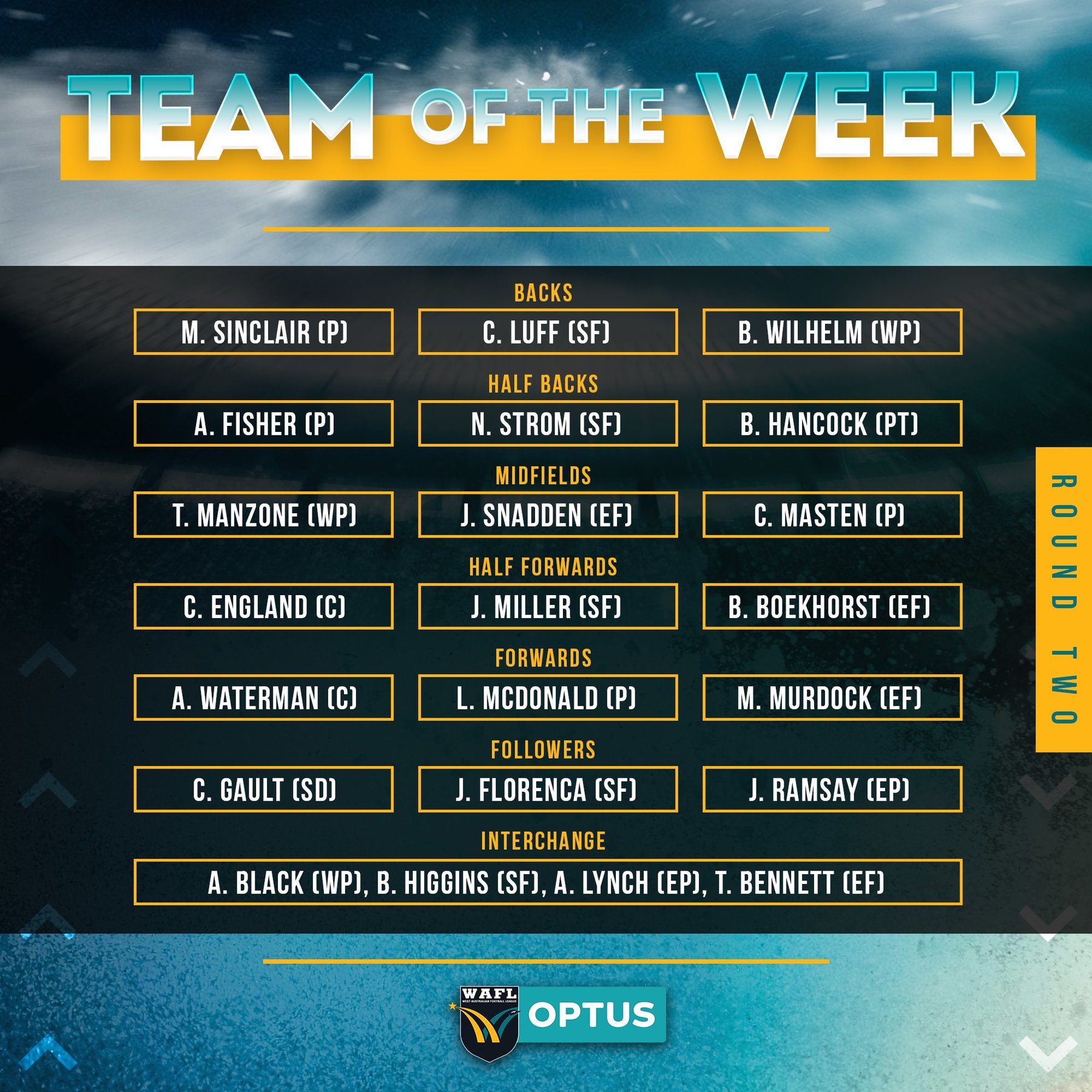 BACK POCKET – BLAKE WILHELM (West Perth)
Started off the new season in impressive form and continued that on Saturday in a game which did see both teams kick it between back-lines for a lot of the contest. But he was again a strong ball winner and tried to set up play the best he could for the Falcons to end the afternoon with 22 possessions and five marks.

FULL-BACK – CHRIS LUFF (South Fremantle)
He was a somewhat surprise return to South Fremantle after two years out of the WAFL system and with concussion symptoms appearing to end his career at this level. But he's come back for 2020 and hasn’t missed a beat. Was given the task on experienced West Perth key forward Michael Lourey on Saturday and was outstanding to hold him to only three kicks while having 10 disposals and four marks himself.

BACK POCKET – MICHAEL SINCLAIR (Perth)
He is now the most experienced WAFL player at Perth in 2020 and the dual fairest and best winner clearly is happy with the increased responsibility as leader now with Corey Yeo having ruptured his ACL. Was his typical rock solid self down back in the win against East Perth finishing the afternoon with 25 possessions, eight tackles and seven marks.

HALF-BACK FLANK – ANDREW FISHER (Perth)
There was a very real chance he might have missed out on playing football at all this season when the Eagles WAFL team was forced to withdraw from the competition. But he was able to find a temporary home at Perth for 2020 and has had no trouble settling in, filling into his usual role off half-back with aplomb and delivering 19 possessions and four tackles in the win over East Perth.

CENTRE HALF-BACK – NOAH STROM (South Fremantle)
He could very well be turning himself into the best and most versatile tall defender in the competition. He showed all of his quality on Saturday in the win over West Perth renewing his rivalry with Tyler Keitel, and clearly took the points keeping the reigning Falcons fairest and best winner goalless. Also had 11 possessions and two marks.

HALF-BACK FLANK – BEN HANCOCK (Peel Thunder)
Could very well be the most underrated player in the competition and now this Saturday he reaches 100 games, and has been a tremendously solid performer largely coming off half-back for the Thunder yet he rarely gets much acknowledgement. Put together another impressive showing in the loss to East Fremantle with 15 disposals, five marks, five tackles, three inside 50s and even did some rucking at times.

WING – TRENT MANZONE (West Perth)
With his hard running ability and the way he continually finds space to see him them then get the ball, run and carry it, and set up the Falcons to attack remains a treat to watch, and clearly he put in the hard work to maintain his fitness during the COVID-19 break. Named to the Team of the Week for a second straight round to start the season after producing 28 possessions, seven marks and three inside-50 entries.

CENTRE – JORDAN SNADDEN (East Fremantle)
Having missed all of 2019, he was one player who could hold his head high in the big derby loss in Round 1 and then backed that up with an even better performance in Saturday's win for East Fremantle against Peel. Finished the game with 28 possessions, three marks, three inside 50s and two tackles.

WING – CHRIS MASTEN (Perth)
The 215-game West Coast Eagles AFL premiership player was named WAFL Player of the Week for his Round 1 showing on debut for Perth, and then backed up in Saturday's win against East Perth by producing another strong performance. Finished the afternoon with 27 possessions, four tackles, three marks and two entries inside the forward 50.

HALF-FORWARD FLANK – CALLAN ENGLAND (Claremont)
Showed the type of exciting form both as a forward and pinch-hit midfielder on Saturday that saw him be seen as having an AFL future. Was tremendous in Claremont's win against Swan Districts with 23 possessions, five marks, five inside-50 entries, two tackles and a goal.

CENTRE HALF-FORWARD – JIMMY MILLER (South Fremantle)
The off-season recruit played just his second WAFL game on Saturday and is already showing he could prove a real difference maker for the Bulldogs in 2020. He is splitting his time between playing as a key forward and then giving Brock Higgins a chop out in the ruck, and is showing he's more than capable of both roles. Delivered 16 disposals, three marks, three tackles, 12 hit outs, three inside-50 entries and two goals in Saturday's win against West Perth.

HALF-FORWARD FLANK – BLAINE BOEKHORST (East Fremantle)
He sure stands out with his new hair colour but he let his football do the talking on Saturday as well as East Fremantle bounced back to beat Peel. Was at his hard-running best both on the wing and at half-forward and despite kicking two behinds, did everything else well to end up with 25 possessions, five tackles, four inside-50 entries and four marks.

FORWARD POCKET – ALEC WATERMAN (Claremont)
Continues to thrive on the fact that his body is now allowing him to play regular football. Talent was never his issue, his health and body just continued to let him down. That now appears behind him and he was again instrumental in the win over Swan Districts with 18 disposals, four inside 50s, three tackles and three crucial goals.

FORWARD POCKET – MILAN MURDOCK (East Fremantle)
The lively small forward who is also proving himself of contributing strongly in the midfield is another who was far from the worst in the big first up loss to South Fremantle, and then was tremendous in Saturday's win against Peel. Ended up with two goals to go with 18 possessions and eight tackles which helped him earn three free kicks.

RUCK – COREY GAULT (Swan Districts)
He was the ruckman in the 2017 WAFL Team of the Year the same season he won the fairest and best award in Swan Districts, but over the last couple of seasons has been used more as a key forward with Swans desperate for a goalkicking target. But he has come back to the ruck so far in 2020 and while they are still trying to find a way to kick goals, he has been brilliant. Was so again against Claremont with 24 possessions, 31 hit outs, four inside 50s and three tackles.

RUCK ROVER – JAKE FLORENCA (South Fremantle)
Is now the leading ball winner across the competition for the first two rounds as he continues to take the next step up into the elite category of WAFL midfielders. Had a terrific 2019 season but has gone to another level and on Saturday was best afield against West Perth with 32 possessions and nine tackles.

ROVER – JACKSON RAMSAY (East Perth)
Is fresh off a brilliant 2019 season where he was named to the Team of the Year and won East Perth's fairest and best award on return from a knee reconstruction. His first game of 2020 saw he has intentions of certainly backing that up or even improving on it producing 32 possessions, five inside-50 entries and four tackles.

INTERCHANGE – AARON BLACK (West Perth)
The West Perth captain is now closing in on his 200-game milestone and has started the 2020 season just as well as he's played throughout the rest of his decorated career. Worked tirelessly again on Saturday at home to South Fremantle to amass 28 possessions to go with seven tackles.

INTERCHANGE – BROCK HIGGINS (South Fremantle)
The reigning ruckman in the WAFL Team of the Year has done nothing wrong to start the 2020 season with South Fremantle. Clearly won his battle in Round 1 against East Fremantle and was again the best big man on the ground in Saturday's win against West Perth with 16 disposals, 33 hit outs and six tackles.

INTERCHANGE – AIDAN LYNCH (East Perth)
After playing 69 games with West Perth and often being a tackling machine who could rack up winning the ball but was behind Shane Nelson and Aaron Black, he made the move this off-season and looks to agree with him. Has joined arch-rivals East Perth and his first appearance for the Royals saw him amass 32 possessions, 10 inside 50s, six tackles and a goal.

INTERCHANGE – TOM BENNETT (East Fremantle)
Has now got 36 games under his belt at WAFL level so is starting to become a settled part of East Fremantle's midfield. Had a good season in 2019 and after being quiet in Round 1, bounced back impressively in Saturday's win to end the contest with 25 possessions and four tackles.

UNLUCKY BUNCH
There were plenty of players who delivered tremendous performances across Round 2 but couldn’t quite fit into the Team of the Round, including: