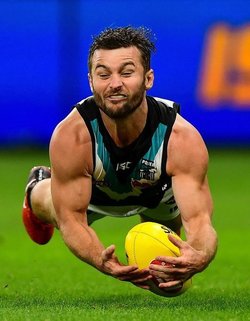 The WA Football Media Guild and West Australian Football Commission hosted the annual WA Football Media Awards at Optus Stadium last night, Tuesday November 19, to recognise the season’s high achievers both on and off the field.

This included awards for online, print, radio and television media, WAFL and AFL players and coaches, as well as special awards for outstanding service.

Awards were judged in each category by members of the WA Football Media Guild, the West Australian Football Commission, and an appointed judging panel.

MEDIA AWARDS
Women’s Football Media Award
Daniel Carson (AFL Photos)
His collection of work promoting female football was of extremely high quality and the power of the images a great promotion for the women’s game. Steve Butler was highly commended for his collection of articles and overall promotion of women’s football.
Emerging Media Talent Award
Jimmy Williams (6PR / Ch9)
Jimmy was a strong candidate for this award in his first year in the industry in 2018 and emerged as an even stronger talent this year.
Jimmy's role at 6PR includes attending footy press conferences, writing copy for news, and voicing reports. He also produces 6PR's weekend sports programs and publishes content to the website. On game day, Jimmy was 6PR's boundary rider at Dockers matches.
In 2019, his career continued to build as an emerging TV talent with 9 News, attending AFL training and press conferences, packaging sports stories, and shot-listing and creating match reports for AFL games on weekends.

ONLINE AWARDS
Best Overall Online Performer
Craig O’Donoghue (The West)
Craig covered a wide range of topics across a broad range of online platforms with skill.
Most Outstanding Use of Social Media
Steve Allen (10 News) – Blake Acres
Steve’s use of social media for this exclusive interview with new Fremantle recruit Blake Acres, responded to the competitive news pressures by putting it online immediately, rather than waiting for other outlets to pick up the story.

PRINT AWARDS
Bernie Kirwan-Ward Best WAFL Story
Steve Butler (The West) – Wrong target
A very human news story illustrating the pressures footballers come under and how they react to them. It also carried an important message to spectators about acceptable behavior at the football.
Ross Elliot Best Match Report
Mark Duffield (The West) – Dockers conjure recipe
A top-class report written in a delightful style.
Jack Lee Best News Story
John Townsend (The West) – The Rioli Defence
A genuine exclusive on one of the biggest football stories of the year that answered questions the sporting world wanted to know. Amid the numerous questions arising over the Willie Rioli drug test story, John was able to get this exclusive explanation for Rioli’s actions with a new level of detail.
Alan Newman Best Feature Story
Braden Quartermain (Sunday Times) – Why Fyfe’s in Poll Position
This article had great insight and depth of analysis into why Fyfe was almost a certainty to win the Brownlow, and on top of that analysis Braden had Fyfe talking about the change in his game style over the course of his career, which would have been fascinating to most football fans.

RADIO AWARDS
Best WAFL Coverage
Sport FM 91.3fm
Sport FM for their weekly call of WAFL games and extensive coverage throughout the week with WAFL content across all of their programs. The judges also commended ABC radio for their long-term coverage of the WAFL competition, noting this has continued despite increasing commitments to cover AFL games and other sports.
Tim Flynn Best Commentator
Clint Wheeldon (ABC Radio)
The judges said that Clint’s descriptive explanation of where the ball is on the ground and ability to lift at the right moment was excellent. Clint called every AFL game at Optus Stadium, as well as his 5th consecutive AFL Grand Final in 2019.
Brien Thirley Best Expert Commentator
Brad Hardie (6PR)
Brad’s flair, entertainment value and ability to inform, combined with his analysis of the game made him a worthy winner of this award. The judges also commended Mick Malthouse and said he was a great addition to WA’s ABC commentary team.
Dick Buchanan Best News Story
Kim Hagdorn (6PR) – Willie Rioli
Kim Hagdorn was the first to break the news that due to an ASADA drug test, Willie Rioli would be withdrawn from the West Coast team to play Geelong in the Semi Final the following night, which became one of the biggest football news stories of the year.