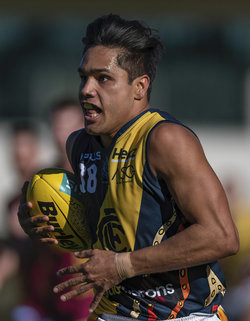 The 2019 season has proven to be a good one for Western Australian draft prospects with 19 players nominated for the Simply Energy AFL State Combine.

Claremont have the most players with six, while both East Perth and Peel Thunder have three representatives each.

“This is another exciting opportunity for players from right across Australia to showcase their AFL potential ahead of the 2019 NAB AFL Draft,” AFL Talent Ambassador Kevin Sheehan said.

Western Australia will run each of the individual tests for the nominated players on Sunday, October 13, at the UWA Recreation Centre.

For a player to receive a State Combine invitation, they must have been nominated by at least two AFL Clubs.

Below are the Western Australian prospects at the 2019 AFL State Combine.

CAMERON ANDERSON - CLAREMONT
The Wembley Downs Junior is a lively rebounding defender who can also play as a wingman. Anderson loves to take the game on, using his speed and skills to carve his way through the opposition’s defensive zones. In 8 games for Claremont’s Colts team, Anderson averaged 13 possessions, 3 tackles, and 3 marks with his best performance coming against East Perth (22 possessions and 5 inside 50s). He was also solid for Western Australia, averaging 10 possessions (four contested), 3 marks, 3 tackles, 2 clearances and 2 inside 50s across 3 games. His notable performances came against South Australia (10 possessions – 6 contested – 5 tackles and 2 clearances) and the Allies (14 possessions, 5 marks and 2 inside 50s).

ISAIAH BUTTERS - CLAREMONT
The Fremantle Next-Generation Academy member relocated to Perth from Halls Creek and has shown enough promise to receive an invitation to the state combine. He was one of the most influential players for Claremont in the Grand Final with 4 goals from 7 possessions to help the Tigers win the Premiership. Throughout the 2019 season, Butters showed he has the raw potential to be a viable small forward prospect for this year’s AFL Draft. In five games for the Tigers, Butters kicked 5 goals and averaged 10 possessions, 4 tackles, 3 marks, 2 inside 50s. Other notable performances came against Swan Districts in round 10 (10 possessions, 5 tackles and 2 goals) and Subiaco in round 14 (18 possessions, 6 marks, 3 tackles and 2 goals). He is a member of Fremantle’s Next-Generation Academy.

JACK COOLEY – CLAREMONT
The Claremont Junior made a name for himself with a stunning Grand Final performance that saw him win the Mel Whinnen Medal as the best player on the ground. In the Grand Final, Cooley collected 33 possessions (18 contested), won 14 clearances, laid 7 tackles, recorded 7 inside 50s and took 5 marks. Cooley is a big-bodied midfielder who is tough, competitive, defensively sound, balanced and reads the play well. In 20 games for the Tigers, Cooley averaged 22 possessions, 3 inside 50s, 3 marks and 3 tackles. His notable performances during the season came against Subiaco in round 14 (33 possessions, 5 inside 50s, 5 tackles and 5 marks), Perth in round 16 (31 possessions, 8 tackles and a goal) and South Fremantle in round 19 (28 possessions, 7 tackles and 2 goals). However, it was his finals campaign that really caught the eye of recruiters. Across the four finals, he averaged 26 possessions, 5 inside 50s, 5 tackles and 4 marks.

JEREMY GODDARD – CLAREMONT
A member of the AFL-AIS Academy in 2015 and 2016, Goddard has established himself as solid up-and-coming ruck prospect. In 21 games for Claremont’s League team, Goddard recorded the most hit-outs (828) of any ruckman in the WAFL Competition. He averaged 9 possessions, 39 hit-outs, 3 tackles and 2 marks. His best games came against East Perth in round 11 (12 possessions and 45 hit-outs), Peel in round 17 (14 possessions, 52 hit-outs and a goal) and Swan Districts (14 possessions and 43 hit-outs). As a ruckman, Goddard always carries a physical presence, whether it be through his strength in the ruck contest, his contested marking ability or his desire to lay a strong tackle.

LENO THOMAS - CLAREMONT
The 2017 WA U16s State Academy member is a medium sized defender who can lock down on his direct opponent but can also provide excellent rebound from the defensive half. He was the hero for Claremont in the Colts’ Grand Final when he produced the game-saving smother in the final moments of the last quarter. He finished third in Claremont’s Best & Fairest after he averaged 15 possessions, 3 marks and 2 tackles across 18 games. His best performances came against West Perth in round two (21 possessions and 10 marks) and Peel Thunder in round six (21 possessions). He is a member of Fremantle’s Next-Generation Academy.

AJANG AJANG – EAST PERTH
The former West Coast Eagles’ Academy member, Ajang is a ruckman with raw athleticism. He is powerful in contests, excellent with his ruck craft, has good skills and reads the play well. In 18 games, Ajang kicked 6 goals and averaged 12 possessions, 26 hit-outs, 3 tackles and 3 marks. His best games were against Swan Districts in round 13 (21 possessions, 24 hit-outs and a goal), Peel Thunder in round 14 (13 possessions and 38 hit-outs) and West Perth in round 15 (21 possessions and 40 hit-outs).

RHAI-ARN COX – EAST PERTH
The Mount Hawthorn Junior made a name for himself in 2017 when he kicked a goal after the siren against Vic Country, that ultimately secured the AFL U16s Championships for Western Australia.  In six games for East Perth’s Colts team, Cox averaged 10 possessions, four marks, two tackles and kicked eight goals. His best performances coming against Perth in round 12(16 possessions and 2 goals) and Peel Thunder in round 14 (14 possessions and a goal). He also showed promise when playing for the Royals’ Reserves team. In three games, he kicked three goals and averaged 11 possessions, 2 marks and 2 tackles with his best performance coming against South Fremantle in round 17 (13 possessions and 3 goals). He is a small forward who is quick, evasive, skilful and has x-factor.

JARVIS PINA – PEEL THUNDER
The Peel Thunder Colts’ captain is an attacking small defender who also has the capability to lock his direct opponent out of the game. In 8 games for the Thunder’s Colts team, Pina kicked 3 goals and averaged 22 possessions, 5 marks and 5 tackles with notable performances against West Perth in round one (32 possessions, 8 marks and 4 tackles), Perth in round 11 (21 possessions and a goal) and East Perth in round 14 (33 possessions, 5 marks and 5 tackles). Pina was also a member of the WA U18s State Academy’s Leadership Group and was excellent for the Sandgropers. He averaged 12 possessions, 4 marks, and 2 tackles, with his best performance coming against Vic Country (17 possessions, 3 marks and 2 rebounding 50s). As a small defender, Pina rebounds with class – he’s a sound decision-maker and he uses his damaging skills to penetrate the opposition’s defensive zone.

TYRONE THORNE – PEEL THUNDER
The younger brother of Peel senior member Calvin, Tyrone is a raw small forward with plenty of upside. He finished seventh in Peel’s Colts Best and Fairest after he kicked 16 goals and averaged 19 possessions, 6 tackles, and 3 marks across eight games. He was arguably Peel’s best player in their Grand Final against Claremont with 22 possessions, 8 tackles and a goal. He also showed promise for Peel’s League team where he averaged 11 possessions and 5 marks across two games. Thorne was also a member of the WA U18s State Academy. Across four games for the Sandgropers, Thorne booted seven goals and averaged 11 possessions, four marks, three tackles and two inside 50s with his best performances coming against Vic Metro (13 possessions and two goals) and the Allies (10 possessions and three goals). Despite having a smaller frame, Thorne hunts the ball and the man with intent, never shirking a contest. He also plays at a frenetic pace and hits his targets by hand or foot.

REGAN CLARKE – PERTH DEMONS
The Manning Junior is a hard-working wingman who has also demonstrated an ability to play as an inside midfielder. He made a name for himself when he kicked the winning goal against Vic Country that ultimately secured Western Australia the U18 Championships. In four games for the Sandgropers, Clarke averaged 15 possessions, 6 marks and 4 inside 50s. He finished sixth in Perth’s Colts’ Best and Fairest after he averaged 20 possessions, 5 marks, and 4 tackles across six games. His best performances came against South Fremantle in round two (20 possessions, 5 marks and 3 tackles), Swan Districts in round three (26 possessions, 6 tackles and 5 marks) and Subiaco in round 17 (26 possessions, 6 tackles and 4 marks). He also showed encouraging signs when playing for Perth’s Reserves team. In two games, he averaged 20 possessions, 6 marks and 4 tackles.

NOAH PEGORARO – WEST PERTH
The Kingsley amateur only joined West Perth this season but has shown enough across six League games to receive recognition from AFL clubs. Across the six games, Pegoraro averaged 12 possessions, 5 marks, 5 hit-outs, 3 tackles and 2 inside 50s. His best performances came against Peel in round one (15 possessions and 6 marks), Swan Districts in round four (12 possessions, 8 marks and 7 hit-outs) and Perth in round 13 (18 possessions, 13 hit-outs, 5 marks and 4 tackles). As a key defender, Pegoraro is strong overhead, reads the play well, positions himself in the right spot and makes sound decisions with ball in hand.