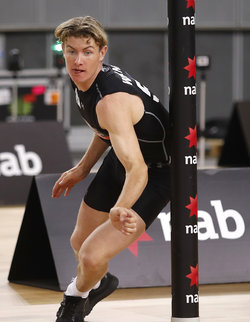 The NAB AFL National Draft Combine is in full swing for 2019, with day three seeing a number of athletes put through their paces inside Margret Court Arena in Melbourne.

After two solid days of physical screenings, AFL club interviews and media commitments, players were able to showcase their ability during 20-metre sprints, Yo Yo Test and vertical jump on day three.

Plenty of Western Australian stars shone bright throughout the rigorous day, most notably West Perth’s Ben Johnson who finished second overall in the 20-metre sprint with a time of 2.89 seconds. The back-man missed out on the title by 0.2 of a second.

Subiaco’s Mitch Georgiades was the other to show promise in the short sprint, finishing in 2.93 seconds, particularly impressive given the size of the medium forward.

Jeremy Sharp continued to boost his draft potential, sprinting his way to 2.97 seconds.

The gruelling Yo Yo Test provided the perfect platform for draft hopefuls to flourish.

East Fremantle trio Chad Warner, Trey Ruscoe and Sharp blitzed the endurance test with standout results. Warner finished with 21.6, just 0.3 off the winning level, while Ruscoe and Sharp scored 21.4 and 21.3 to place the pair in the top handful of participants.

Perth’s Elijah Taylor showed his fitness levels were at an elite level to finish with 21.1, before dominating the Agility Test, finishing second overall with 8.01 seconds.

Rivers followed his strong performance in the Yo Yo to complete the Agility Test in a time of 8.10 seconds, placing him fourth overall.

Luke Jackson did his chances no harm with a 20.8 in the Yo Yo Testing, an outstanding performance given his size as a ruckman.

Johnson also finished inside the top three for the standing vertical jump to cap off a fantastic day for the youngster.

West Perth defender Jaxon Prior rounded out the day for the Sandgropers to finish seventh in the running vertical jump with 85cm.