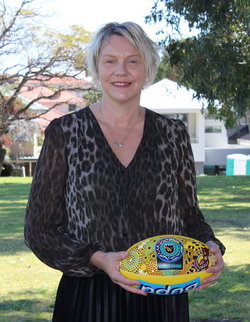 West Australian Football Commission Diversity Coordinator Louanne Wakefield has been named as a finalist in the Football Woman of the Year Awards that will be held in Melbourne this week.

Louanne has been recognised for achieving outstanding outcomes in the Diversity space for over a decade and going above and beyond in all aspects of her work, which includes mentoring young multicultural and indigenous women, and providing them with a pathway in the industry.

WAFC Executive Manager - Youth, Community & Game Development Troy Kirkham said Louanne not only went out of her way to support the girls in her programs, but built strong relationships across a number of multicultural and indigenous communities based on mutual trust and respect.

"Louanne continues to play a significant role in the industry, and has also been sought by the AFL to assist in coordinating a number of their national programs and carnivals," he said.

"Her work has been acknowledged by many over the years and it is a true testament to Louanne that she has now been recognised by the Awards committee."

Louanne said she was extremely honoured to be a finalist for the award.

"I'd like to thank the judging panel for spending the time to read all the nominations, it must have been an incredibly hard job of shortlisting them. Thank you to the Essendon’s Women’s Network and all the sponsors. I would also like to recognise all the other incredible women that were nominated and also congratulate all the other finalists in all the categories. The work that each of them do continues to inspire me," she said.

"It has been so exciting to be a female in the football industry, and to play a key part in female football just as it has exploded in popularity. Our programs and competitions have moved a long way in the right direction.

"Our young girls now have access to strength and conditioning coaches, sports trainers and the best coaches at every training session, scratch match and carnival.  Young women that are involved in our game have role models that they can aspire to be like, both on and off the field."

"I can’t wait to see what’s next for Women in Football."

The Football Woman of the Year Award recognises a woman who plays an active role in the Australian Rules Football community, has made a positive and measurable impact to the advancement of women in the industry, has demonstrated a willingness to publicly advocate the important role that women have in football and is held in high esteem by her peers.

Louanne is one of four finalists in the overall Football Woman of the Year category for 2019 and the West Australian Football Commission wishes her the very best at the Awards ceremony.