Walters desperate for more after banging down Lions doorSaturday, September 21, 2019 - 10:05 AM - by Chris Pike 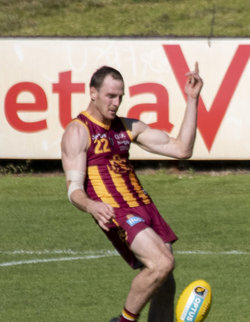 HAVING had to bang down the door for a league opportunity at all and then a spot in the midfield, Max Walters takes nothing for granted in his career but now that he's won one WAFL premiership, he's desperate to experience more with Subiaco.

Walters came through a talented midfielder at Subiaco playing 25 colts matches over 2013 and 2014 where he averaged 19.4 possessions and kicked 15 goals before he proved at the start of 2015 he was ready to step up to senior football with 27 disposals and two goals in his lone colts appearance.

Despite a tremendous season in the reserves where he averaged 20.1 disposals and kicked 13 goals, Walters couldn’t break into the premiership team in 2015 with Subiaco and it wasn’t until Round 9, 2016 that he made his debut.

He held his spot for Round 10 and he played well averaging 19 possessions and kicking a goal over those two matches, but the depth and quality at the Lions meant those were his only two league appearances of the season.

It didn't deter him, though, as Walters dominated in the reserves throughout 2016 producing 23.1 possessions a game but having delivered two brilliant seasons at that level with only two league games as a reward, it's only natural for anyone to wonder what more can they do.

However, not once did Walters consider not sticking with it with the hope an opportunity would eventually pop up and that happened in 2017 even if it was with him playing a role largely across half-forward.

But he would play 23 matches that season including the losing Grand Final to Peel Thunder and produced impressive football with 17.9 disposals a game along with kicking 22 goals.

So even if it wasn’t in the midfield role he was accustomed to, he had proven he was a league footballer which continued in 2018.

It was again largely with him playing at half-forward given the fact that Kyal Horsley, Leigh Kitchin, Chris Phelan and Josh Deluca were on the ball, it was challenging to find too much time there.

But Walters' form remained tremendous and by the end of the season, he was a premiership player and while that was a dream come true, it's only made him hungrier for more.

So the burning feeling for the 23-year-old entering Sunday's Grand Final against South Fremantle at Optus Stadium after a strong 2019 season where his opportunity as a league midfielder has finally come his way, is that Walters desperately wants another premiership.

"I do feel a bit less nervous but to be honest I feel hungry for more," Walters said.

"Now that I've had that taste of success, it's made me hungrier to get that feeling again and that's how I'm feeling into Sunday. I might be feeling a bit less nervous than last year, but other than you just want to win. Once you win one, you just want to keep going and win as much as you can."

While it wasn’t always easy having to play two virtual full seasons of reserves football before a chance came his way and now having to wait until 2019 for a regular midfield role to come his way, Walters never thought of leaving Subiaco and is glad he stuck with it now.

"I couldn’t ever see myself going anywhere else to play because the culture we have at Subi is absolutely elite. I never thought of leaving, I just had to stick it out and hope that the chances that have now come my way would eventuate," he said.

"I didn’t think of quitting entirely, but it was frustrating at times. But you just have to bide your time and I got the opportunity to play forward to start with and I was happy to just play my role for the team and take it from there.

"I wasn’t going through the midfield as much as I'd like to, but it kept me hungry and looking back now it was alright even though there were some tough times when you are in the middle of that period."

While Walters had to patiently wait for a chance to open up as a permanent midfielder at Subiaco and that's only really come on a regular basis in 2019 following the departures of Chris Phelan and Josh Deluca.

He's now embracing that as much as he can especially the chance to playing alongside captain Leigh Kitchin, former skipper Kyal Horsley and former Port Adelaide and Melbourne AFL player Ben Newton.

"It definitely puts you in good stead playing alongside those boys. I've never played with anyone like Hors and out on the field he's always talking and directing, which makes you feel real comfortable out there," Walters said.

"It's the same with Kitch so I just set up and get in the right position where they tell me to go and I feel comfortable out there. Even Benny Newton coming back from the AFL system provides a lot of insight too and he's playing really well right now so it's great playing alongside those guys in the midfield."

Speaking of Horsley, it was impossible for anyone including Walters to not feel for him for finishing runner-up in Monday night's Sandover Medal count yet again for the third time in his career while also having come third on two other occasions.

Making it easier to take, though, was the fact that his teammate Lachlan Delahunty did claim the Sandover Medal and nobody could question that he deserved it immensely.

"It did make it a bit more bearable for Horse to finish second again given it was behind a teammate, but I would have really liked to see him win one because he's such a good player and really deserves that for his career," he said.

"But at the same time, Delahunty had a ripper year and you can't take anything away from so I'm really happy for him as well. But for Horse having been so close so many times, I don’t know if this is his last season or not, but it would have been nice for him to finish on that note or at least to have won one finally."

It is the tremendous depth at Subiaco that continues to make it a challenge for players to breakthrough to become regular league players, but that is what makes them so strong as well because there is always pressure on for spots and there are always quality replacement players ready.

There are without question players now at the Lions who are in the position that Walters was in by the end of 2017 but he is a great example of the value of perseverance.

"I keep telling some of the boys in the reserves who are doing what i was doing two or three years ago where they are playing good footy but it's just such a hard team to break into to stick at it, because your chance will come," Walters said.

"I was playing at half-forward for about two years previously just trying to get a spot and make a name for myself, but definitely I've got more chance to play in the midfield and that's where I feel the most comfortable especially to be playing alongside the boys that you are in there."

While Subiaco continues to be accused of taking shortcuts to the remarkable success they continue to have, the reality is they are the best run club on and off field in the WAFL and they continue to do a strong job of developing their own players on top of recruiting wisely to top the group up.

If you look at the squad of 26 named for Sunday's Grand Final against South Fremantle and half of them are Subiaco products while the blooding in 2019 of Ben Reid, Jakob Atkinson, Kyle Stainsby, Jack Beverley, Travis Clegggett, Michael Braut and Tom Edwards-Baldwin will only set up the Lions for the future.

Walters does get frustrated when Subiaco gets accused of buying their success because he himself is a prime example of a local product coming through the ranks and now earning everything that he achieves.

"I don't think the club gets enough credit for the work they do and the development they put into the playing group. A lot of people just think we pay for all our premierships and what not which is a bit frustrating because those people don't understand the good culture we have," he said.

"And if you look at this this year, we've got so many young, local boys coming through and getting their opportunity to come in and play their role. Everyone treats everyone the same at the club and it's a great place to be at."

Now that the Grand Final is so close, Walters just can't wait for the big game to arrive and he can run out onto Optus Stadium on Sunday and hopefully by the end of the afternoon he can become a dual premiership player.

"Obviously everyone wants to strive for the next level of the AFL, but right now it's as good as it's going to get for a lot of us especially to run out onto Optus," he said.

"It's an unreal feeling with the feel of the ground and the lights and everything. It's an experience you won't get too often so you feel very grateful to experience that.

"You just want the game to hurry up really because I hate waiting. I don’t get too nervous about the whole thing, I just try to treat it the same as every week and training has all been the same so we've been going through the same routine.

"I think it's a good thing that I don’t get too nervous so the build up isn’t too bad during the week."

The fact that Subiaco have had a two-week wait to play in Sunday's Grand Final since beating South Fremantle in the second semi-final and given they had a break in the first week of the finals too mean that Walters and all his teammates just can't wait for game day.

But training has certainly remained at a high intensity considering realistically there's almost 30 players that could make a strong case to earn selection for the Grand Final from the Lions.

"Usually you enjoy playing footy every week and you like that consistency but the training ramps up on those bye weeks anyway so we try to end up getting the same amount of work and run in anyway," Walters said.

"We all push each other pretty hard so it's not too much of a worry having had those byes, but it's definitely always better to continue to playing. But we can't do much about that and we'll definitely be ready to go on Sunday.

"It makes training pretty chaotic really with guys desperate to show that they deserve a spot but that happens most week with our team because we've got some pretty good depth.

"We'll always train as hard as we can each session so this week isn’t anything too out of the ordinary, but you can obviously see the vibe going up and everyone is a bit more up about for Grand Final week."