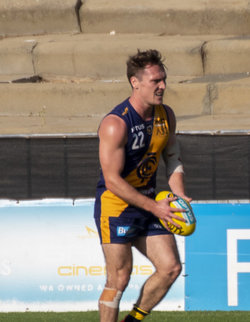 CLAREMONT and West Perth finished first and second at the end of the season in the reserves so it's only fitting it's the Tigers and Falcons fighting out for the premiership on Sunday morning at Optus Stadium.

A monster day of celebration of West Australian football is planned for Sunday at Optus Stadium to conclude the 2019 WAFL season and it all gets underway with the Reserves Grand Final between Claremont and West Perth.

The game will begin at 8.40am and for those not yet in attendance at Optus Stadium that early or who might not be able to make it at all during the day, it will be available to be watched on livestream from wafl.com.au and the WAFL Facebook page.

Claremont was the dominant team right throughout the 2019 reserves season losing just the one game on the way to claiming the minor premiership with a 15-1 record.

That earned them the week off in the first week of the finals while West Perth took on Subiaco at Joondalup's HBF Arena with the Falcons having finished in second position on the ladder with a 10-6 record.

West Perth would win that qualifying final contest over Subiaco by 19 points to set up the second semi-final the following Sunday against Claremont at Revo Fitness Stadium.

It was a tough 77-point defeat for West Perth but the Falcons still had another chance to advance to the Grand Final by playing in last Sunday's preliminary final against East Fremantle at Fremantle Community Bank Oval.

West Perth went on to produce an impressive preliminary final performance to beat East Fremantle 14.13 (97) to 7.8 (50) and book in a Grand Final clash with Claremont this Sunday.

There was a lot to like in the West Perth performance with Liam Tedesco kicking three goals, Brayden Antonio two, Mitch Antonio two and Tom Medhat two.

That all sets up Sunday's Grand Final and with Subiaco having won the last two premierships, it will be a new winner in the reserves.

It is a strong looking Claremont line-up and some difficult decisions will have to be made with Tom Ledger and Jordan Law back available after playing in last Sunday's league preliminary final loss to South Fremantle.

Then there is former league captain and dual premiership midfielder Jake Murphy who is a 134-game WAFL player while Jesse Laurie has 91 league games under his belt, Alex Manuel 43 and Tom Curren 18 on top of 25 in the AFL with St Kilda.

It's easy to see why Claremont lost just one game all season and comes into the Grand Final having beaten West Perth in all three meetings in 2019 by three points in Round 2, 98 points in Round 18 and 77 points in the second semi-final.

But this is a different looking West Perth team boosted with the availability of Liam Tedesco, Brayden Antonio, Tyson Moulton, Dylan Yem and Sam Rotham who did play in the last league final for the Falcons that was an elimination final loss to the West Coast Eagles.

The Falcons are also boosted by Koopah Todd who comes up from the colts fresh off winning the Jack Clarke Medal while Scott Nelson, Conal Lynch, Troy Yukich, Tom O'Donnell, Kael Coleman, Tom Medhat and Slade Hawkins all have at least some league experience.