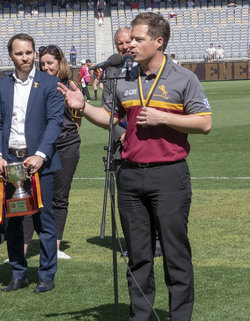 HIS coaching career couldn’t have got off to a better start but for Subiaco coach Beau Wardman, he knows that the Lions being favourites or what they've done leading into Sunday's Grand Final guarantees them nothing.

The Wardman story to now coaching a team in a WAFL Grand Final is a remarkable one. Having decided to embark on a coaching career after a previous life as a field umpire in the game, Wardman took on a challenging role with the Subiaco colts for the 2017 season.

But by the end of 2018, the Lions were celebrating a colts premiership on top of making history with the league and reserves flags of last year before Jarrad Schofield returned to the AFL system to take on an assistant coaching role at Port Adelaide.

That left a vacancy at the helm of the Subiaco league side and there was no more impressive candidate than Wardman who despite basically being on a hiding to nothing stepping into the role, has done a tremendous job.

With the dominance of Subiaco having already played five consecutive Grand Finals for four minor premierships and three flags, anything but continuing with that success would have been considered a failure by some for Wardman.

But he deserves enormous credit for the job he has done in 2019 because while Subiaco might be again the dominant force having lost just one game along the way to qualifying for Sunday's Grand Final against South Fremantle, this is a very different Lions team.

From Subiaco's premiership team from last year, Subiaco immediately lost Zac Clarke to Essendon after a dominant season in the ruck while club great Chris Phelan moved to Melbourne.

Then early in 2019, Josh Deluca went in the mid-season draft to Carlton and Kyle Halligan body only allowed him to play one reserves game all season.

Clancy Wheeler has battled injury throughout the season on top of a trip to the Ashes as well while it took half a season for the Lions to settle on playing Lachlan Delahunty in the ruck permanently.

That meant backing in Ryan Borchet as a key forward target surrounded by mid-size options Ben Sokol and Rhys Waters along with the smaller brigade of Simon Moore, Tom Edwards-Baldwin and Jack Beverley.

Even the midfield is a different looking one without the dominant ruck work of Clarke and instead having the mobility of Delahunty along with the experience and class of Kyal Horsley and Leigh Kitchin who are now ably supported by Max Walters, Ben Newton and in recent weeks Justin Joyce.

So while on the surface everything looks to have gone smoothly for Subiaco again in 2019 as they prepare for a sixth straight Grand Final, Wardman deserves enormous credit for the work put in to have them there while providing opportunities to the next generation.

"The transition of some of our older guys leaving and getting an opportunity at AFL level is something the club has pride itself on over a long period of time, but to transition some of those younger guys who have been playing reserves for a fair period has been important for us," Wardman said.

"Travis Cleggett, Ben Reid and Daniel Leach have all stepped up in various capacities this year, and then for kids like Kyle Stainsby and Jack Mayo to debut to see them come in and play strong league football is great for our club and the program we're running.

"Hopefully we see the benefit of that in years to come as well."

Subiaco as a club at league level might be preparing for a sixth straight Grand Final in the WAFL, but for Wardman this is his first experience.

It's the same for the likes of Kyle Stainsby, Michael Braut, Harry Marsh, Jack Beverley, Jakob Atkinson, Tom Edwards-Baldwin, Kaiden Fullgrabe who are named in the final 26 so there's no shortage of excitement around the Lions camp heading into a day Wardman is excited for.

"It's really exciting. It's a culmination of all the hard work throughout the season and South Fremantle are formidable opponents," Wardman said.

"Hopefully it's a good day and a really good spectacle. Personally I'm excited by the opportunity knowing that we've got full support and our preparation has been right. I'm confident going into the weekend."

There are also some challenges for Wardman and his coaching staff at the selection table this week leading into Sunday's Grand Final against South Fremantle at Optus Stadium.

Ryan Borchet missed the second semi-final win against the Bulldogs but given his work over the course of the season that saw him kick 42 goals including 11 over the past three weeks over the home and away season mean he's a lock to return for the Grand Final.

His partnership late in the season with Ben Sokol was remarkable and in those last three weeks they combined to kick 29 goals between the two of them, so Wardman has no problem confirming him the 22-year-old as an automatic inclusion for the Grand Final.

"His form over the season has probably put him in a position where he is probably going to come in this weekend," Wardman said.

"That might mean that we have to juggle our team and positions around a little bit, but I think the bank of work he's done across the season will give him a chance this weekend."

Perhaps the most fascinating aspect of selection for Subiaco will be whether or not Wardman and his staff decide to back in 154-game three-time premiership veteran Clancy Wheeler to play his first league game since Round 14.

It has been a season that never fully got going for the 31-year-old and then he went to the UK for a trip to take in some of the Ashes Test Series fully knowing there would be no guarantee of a return to the league side once he was back.

He returned to play in the reserves in Round 20 and then despite breaking his nose in the reserves qualifying final loss to West Perth, he played solidly in the first semi-final loss to East Fremantle while wearing a face mask finishing with 16 possessions and nine marks.

What he will provide Subiaco is an experienced option in attack and a genuine back up option to Delahunty in the ruck but it's no easy decision for him to replace someone in the side.

The most obvious one will be Jakob Atkinson who has been playing a similar role to that of Wheeler in his absence and he did have a quiet second semi-final against South Fremantle, but that doesn’t make the decision any easier for Wardman.

"He (Wheeler) has been training really well over the last couple of weeks and we put that to him. We sort of said to him four or five weeks ago that he was no guarantee to play a league final, let alone a Grand Final should we make it," Wardman said.

"But he's done everything that he can at the moment to push his case so we'll have to have that discussion and see where he ends up. I think the decision is purely based on form. Obviously he is a proven player at league level and his experience on Grand Final day might be important for us.

"But he is also understanding of where he's at and the players that have got us to this position who have earned an opportunity. Whoever misses out if Clancy does come in will be unfortunate, but his character and understanding means he knows where he's at."