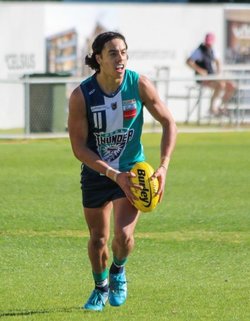 AFTER an incredible season in the WAFL Simply Energy Colts, Peel Thunder plays Claremont at Optus Stadium on Sunday with the 2019 premiership at stake

The game will bounce down on Sunday with the scheduled start time of 11:40am.

The Thunder are out for redemption after being beaten by 22 points at the hands of Swan Districts in the 2018 preliminary final, while the Tigers are aiming to claim their fourth Colts premiership from seven Grand Finals this decade.

Throughout their 2019 home and away campaign, the Thunder only lost two games for the year against Claremont in Round 6 (12 points) and against East Fremantle in Round 15 (12 points) to take out the minor premiership.

The Thunder were also clinical in the second semi-final against Claremont, defeating the Tigers by 34 points to secure a Grand Final berth.

In the qualifying final, the Tigers defeated a wayward West Perth by just five points, while in the second semi-final they were defeated by the Thunder to the tune of 34 points. Then in the preliminary final in a rematch against the Falcons, the Tigers held on by 21 points to advance to the Grand Final.

Both of these clubs have had intense battles throughout the 2019 Simply Energy WAFL Colts Competition.

In Round 6, the Tigers defeated the Thunder by 12 points at Claremont's Revo Fitness Stadium, on the back of brilliant performances by Thomas Baldwin (22 possessions and a goal), Max Minear (12 possessions and 31 hit outs) and Leno Thomas (21 possessions).

In Round 17, the Thunder scored revenge after defeating the Tigers to the tune of 17 points at Mandurah's David Grays Arena.

In the second semi-final the Thunder put their foot on the gas to defeat the Tigers by 34 points at Revo Fitness Stadium.

THE KEY PLAYERS
PEEL THUNDER
James Ewing
The Eaton Boomers’ product was named the full back in the Team of the Year after a stellar campaign. In 16 games, Ewing averaged 17 possessions and five marks. With ball-in-hand, Ewing is super-efficient, and is capable of providing excellent rebound that can lead to attacking opportunities.

Ben Middleton
The Halls Head junior is one of the better key forwards in this year’s Simply Energy WAFL Colts competition. In 12 games, Middleton kicked 23 goals to take out the competition’s leading goalkicker award and averaged 11 possessions and five marks. As a key forward, Middleton always works hard to provide an option, is strong overhead and has good skills.

Brad Oldfield
The 2018 WA U18s State Academy player had an excellent season for the Thunder, which cultivated in him finishing eighth in the Jack Clarke Medal. Across 14 games for the Thunder, Oldfield booted 11 goals and averaged 21 possessions, five tackles and four marks. A blue collar midfielder, Oldfield accumulates possessions and then disposes of them in ways wthat are frequently precise and damaging.

Jarvis Pina
The Peel Thunder captain is a small defender who has the ability to lock down on his direct opponent, but also knows when to provide attacking rebound. Pina uses his speed and his deft skills to carve through the opposition’s defensive zones. In seven games, he averaged 23 possessions, six marks and five tackles.

Jack Sears
The South Mandurah product has been plying his trade as a hard-running wingman this year, after making a name for himself as a marking forward in 2018. Across 16 games, Sears kicked 11 goals and averaged 18 possessions and five marks. He always provides a strong link between the defence and the forward line, due to his aerobic capability, his strong overhead marking and his good skills.

Tyrone Thorne
The younger brother of Peel’s senior player Calvin, Tyrone is a small forward who has shown an ability to push into the midfield. In seven games for the Thunder, Thorne kicked 15 goals and averaged 18 possessions, six tackles, four marks and three inside 50s. Thorne never shirks a contest, is defensively sound and is influential with his ability to set up attacking entries.

CLAREMONT
Cameron Anderson
The Wesley College student is a dynamic rebounding half-back flanker who can push onto the wing. Anderson is blessed with speed, and agility,  and loves to take the game on resulting in plenty of attacking opportunities for the Tigers. Across seven games, Anderson averaged 14 possessions, three tackles and two marks.

Jack Buller
A key position player at either end of the ground, Buller is also capable of playing as a ruckman. In 16 games, Buller averaged 13 possessions, four marks, three tackles and kicked three goals playing primarily as a key defender. He is strong in one-on-one contests, is capable overhead, reads the game well and plays with a healthy aggression.

Jye Clark
The Albany product finished fourth in the Jack Clarke Medal after a strong season for the Tigers. In 15 games, Clark averaged 24 possessions, three marks, three tackles and booted six goals to be amongst the best midfielders in the competition. Like his older brother Jordan, Jye is a sound decision-maker, loves the physicality of the game and has solid skills.

Callum Jamieson
The North Beach junior has become one of the better rucks in this year’s Simply Energy WAFL Colts Competition. In 11 games for the Tigers, Jamieson averaged 17 possessions, 23 hit-outs, five marks, four tackles and kicked four goals. As a ruckman, he is athletic, skilful and is a strong overhead mark.

Ronin O’Connor
The Marist Junior is a big-bodied inside midfielder who can also play off the half-back line. In 12 games for the Tigers, O’Connor averaged 16 possessions, six tackles, and two marks. O’Connor is competitive, works hard both offensively and defensively, is extremely hard in the contest and has good skills.

Leno Thomas
The Fremantle Next-Generation Academy is a medium-sized defender who reads the play well and boasts penetrating skills. In 17 games for the Tigers, Thomas averaged 15 possessions, three marks, two tackles and kicked four goals. Thomas is clean, smart with his positioning, makes correct decisions with ball in hand and has the skills to set up attacking forays for the Tigers.