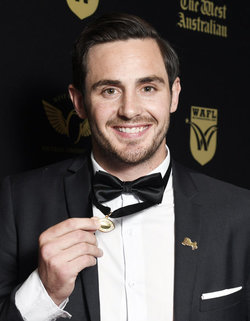 Lachlan Delahunty from Subiaco Football Club was named 2019 Sandover Medallist at the vote count at Optus Stadium tonight, Monday September 16, with a total of 28 votes.

Delahunty polled votes in 13 games after averaging 27 possessions and 15 hit-outs during the season. A best-on-ground performance in the final round saw him secure the Sandover Medal by a solitary vote.

Sandover Medal voting reverted this year to a 3-2-1 system, with multiple medals to be awarded in the case of a tie. Delahunty’s win saw him receive the 109th Sandover Medal.

The winners of the Simply Energy WAFL Colts, WAFL Reserves and WAFLW competitions were also honoured on the night, along with other WA Football Awards for Excellence.

JJ Leonard Coach of the Year