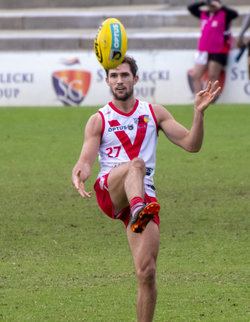 ZAC Dent was always confident he could make it as a WAFL footballer, all he needed was a chance and that has come his way with South Fremantle and he's grasping it with both hands to now be one win away from helping the Bulldogs to a Grand Final.

Growing up in Boyup Brook and playing his early football at Bridgetown, Dent played some impressive colts football at East Perth back in 2014 and then stepped up well to also deliver impressive reserves football in 2015 averaging 20.4 disposals a game.

But the alignment with the West Coast Eagles meant that a league opportunity didn’t come his way and disenchanted with the game, not only did Dent decide to leave the Royals and the WAFL system, but he stepped away from football altogether in 2016 and 2017.

However, he was clearly too much of a talent to not give it one more crack and when things all came together for him to land at South Fremantle during pre-season leading into the 2018 season, it didn’t take Bulldogs coach Todd Curley long to realise that the young man was a WAFL footballer.

He got a couple of opportunities early in the season as part of the league team as a result but then a couple of injuries got in the way and his campaign never fully got up and running. But what he had done was show enough that South Fremantle wanted to persevere with him.

Dent knuckled down and had an impressive pre-season and now has gone on to become a regular and important part of the South Fremantle team in 2019 where he has become a permanent fixture off half-back and playing an important role running off and setting up play for the Bulldogs.

Dent was always confident he could be a league footballer, but with the partnership with the Eagles that chance might have taken a while to come at East Perth and even if he played well, there would have been no guarantee of a regular spot until this year.

But from the second he arrived at South Fremantle in that pre-season heading into 2018, he felt right at home and had the backing of Curley from the start and has never looked back.

"I was pretty confident that if I stayed healthy, I could play some good league footy. Last year I broke my arm and my finger and only got to play two games and three in the ressies because of those injuries," Dent said.

"But the coaches told me there was a role there for me if I played good footy and I was pretty confident I could do it, and when the coach gives you that support it gives you a lot of confident to take the game on and go out there and play well.

"Todd just wants you to stick to what you are good at and I like taking on the game, and he tells me that every opportunity there is that I should do that and as long as I'm doing that, he'll cop it on the chin even if I get caught sometimes.

"When you're injured it's not like you get pushed to the back either, Todd keeps you involved and wants to know how your recovery is going. He is very supportive and is probably the best coach that I've had playing football whether at East Perth or now at South Freo."

Having come up to Perth to play his colts football in 2014, Dent was rightfully happy with how his football was progressing as an inside midfielder for the most part.

He averaged 21.2 disposals that colts season with the Royals and then he played impressive reserves football a year later, still as an on-baller averaging 20.4 touches.

But the writing was on the wall that it would remain a tough place at East Perth for someone like him to earn a regular league opportunity and for Dent, he felt the best option in the short-term was to take a complete break from the game.

He always wanted to give it another crack and when South Fremantle football manager David Depane got in touch, it all came together for him to join the Bulldogs and nearly two years later, it's the best move he's ever made in his football life.

"I played colts at East Perth and had a pretty good year, and then went into the senior and I thought I played some good footy but only managed to play in the reserves because of the alignment with the Eagles," Dent said.

"That sort of burnt me out and I got a bit sick of football so I had a couple of years off and didn’t even play country football or anything.

"I just had a couple of years off with nothing but then got a call from Dave to come down for a run and I've never looked back since. South Freo has been really supportive of me and I couldn’t be happier with the decision to come down.

"I thought it was good in a way because it refreshed me and I got the want for footy back again, and got that passion back. So during pre-season I was keen to get down and to train to see what I could do still.

"I always thought I could play league football but never got the opportunity at East Perth. So coming down here and knowing the club wanted me here, was a big thing for me and that was the best thing for me the way I went about it all."

Dent might have settled perfectly into his role off half-back with South Fremantle and he looks a natural playing that position, but it wasn’t actually until he arrived at the Bulldogs that he began to think of himself anything other than a midfielder.

"I actually used to always be an inside mid, that was all I ever really played as a junior and then colts at East Perth," Dent said.

"I used to occasionally get thrown into the back-line at East Perth when we were getting belted just as a spare behind the ball.

"But since coming to South Freo, the midfield is pretty strong and the coaches suggested I have a crack off half-back because it might be an easier route into the league team. And they give me the license to run off there so I'm enjoying my time down there as part of the back-line at the moment."

While happy with how his journey with South Fremantle is progressing, all of Dent's focus is now on Sunday's preliminary final against the Tigers with the Bulldogs trying to make it fourth time lucky to win through to a first Grand Final in a decade.

Dent is confident that whether it's someone like him who is playing in his first preliminary final or teammates who have played in each of the previous three that it won't be a factor come Sunday and he's excited to know that he's one win away from helping South Fremantle into the Grand Final.

"Obviously there's a few guys who have played in all those three losing ones and they obviously don’t want to experience that again and then there's us new guys who are knew to it that don't want it to happen either," he said.

"It's just something where we'll try to push through to get the win and it's not something that gets brought up at all, we just want to get it down for a whole host of reasons now.

"This is what you work towards and when you're doing all the hard pre-season training and everything, it's with the goal of being in this position and knowing that if we win this game we'll be in the Grand Final, especially on our home ground with all the supporters around, I don’t think we can be in a much better position. It's all in our hands now so hopefully we can make most of it."

Looking back on last Sunday when South Fremantle lost the second semi-final to Subiaco by 34 points, really it was only the third term that let the Bulldogs down and Dent is confident the work done this week will have them raring to go against the Tigers come Sunday afternoon.

"I guess it was a bit disappointing last week losing to Subi. We thought we were a chance to take that one out but I guess now going into this game against Claremont we are pretty confident having beaten them the last couple of times," Dent said.

"I think if we played like we did last time against them we should hopefully be booking our spot in the Grand Final. In training this week we've trained up on a couple of little things and even when we did beat Claremont in the first final, we sort of had a bit of a lapse in the last half.

"Then against Subi, it was more just that third quarter but we've tuned up on some things at training so hopefully that will pay off this week."

While by no means is Dent looking past the challenge that Claremont will present in Sunday's preliminary final, but it's also hard not to dream of what reaching the Grand Final next Sunday against Subiaco at Optus Stadium would mean at the same time.

"It's definitely in the back of my mind and obviously being able to play in a Grand Final is what you play footy for. But I'm focused on this week and all the boys feel the same," Dent said.

"Hopefully we can win on Sunday and then give Subi a red hot crack in the Grand Final, which myself and all the boys think we can win if we get the chance to get there."