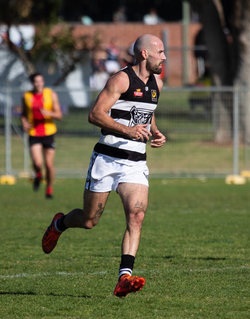 On Monday 9 September the Crown Ballroom was filled with over 900 guests to celebrate the 2019 Perth Football League season.

One of the biggest attendances in recent years saw many awarded for their outstanding seasons.

North Fremantle’s Ryan Cook claimed the nights top award, the CJ Jamieson Medal as the A Grade’s Best and Fairest player for 2019.

After retiring from the WAFL last season Cook joined the Perth Football League this season finishing with 18 votes across seven games including five best on ground performances.

Cook finished one vote ahead of Trinity Aquinas’ Jamie Birrell who has finished third for the award on three occasions (2012, 2014, 2018).

Scarborough’s Scott Worthington rounded out the top three in A Grade, finishing with 14 votes.

Whitford Amateur Football Club’s Troy Skilton took out the TR Howard Medal for the first time as the B Grade Best and Fairest player. Skilton polled four votes more than the rest of the grade with five players finishing in second place.

The second season of the Women’s competition saw Rossmoyne’s Emily Burton take out the Women’s A Grade best and fairest medal. Warnbro Swan’s Kerrilee Brown was awarded the B Grade medal while Swan Valley’s Kayla Augustynek was the C Grade winner. Amber Ugle-Hayward kicked 24 goals for the season to be crowded A Grade’s leading goal kicker.

The Ron Webster Memorial award for the senior champion club was awarded to Curtin Uni Wesley Football Club who had an impressive year with their league, reserves and colts’ sides all making finals. The TK Naylor award for the Colts champion club was awarded to Bullcreek Leeming. The champion club awards are calculated by both on and off field points with points awarded for each win, meeting attendance, payments, paperwork submitted on time. Points are deducted for send offs and for match day fines.

The LA Tetley award for best player of the 2019 State Program was awarded to Ned Brennan from Fremantle CBC. Colin Priddis from the Scarborough Football Club won the administrator of the year while Whitford’s Adam Salecic won the Ken Armstrong Senior Community Coach of the year Award.

This year we had two new inductees into the Hall of Champions which recognises the greatest WA Amateur Footballers or those legends of the game who started their careers in amateur football. This year we welcomed Peter Grosser and Milton Sanders.

Congratulates to all our winners as we conclude another season of amateur football.