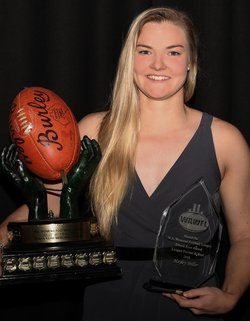 The inaugural WAFL Women’s Awards will be held in the River View Room at Optus Stadium on Monday night, September 9.

The Awards will include the presentation of the Dhara Kerr Award to the fairest and best player in the inaugural Optus WAFL Women’s Premiership Season.

The tradition of the Dhara Kerr Fairest & Best Award will be continued in the WAFLW State League competition after previously being presented to the fairest and best player in the WA Women’s Football League.

The event will be presented in partnership with the WA Women’s Football League, which will also see awards presented on the night for the women’s Reserves and U18 Rogers Cup competitions.

Updates will be posted throughout the night on WAFL social media accounts:

HISTORY
Dhara Kerr was born in Warrnambool, Victoria in 1971 and died in Perth in 1995, three years after she had relocated to WA and begun playing football for Innaloo.

Dhara won Innaloo Football Club’s fairest and best award from 1992 to 95 and captained their first premiership in 1995.  She shared the best on ground award with Sharon Woods in the 1993 Grand Final and won the award outright in 1994 and 1995.

In addition to these awards, Dhara won the League’s Fairest & Best award from 1992 to 1994.  In 1994, Dhara was selected as Deputy Vice-Captain for the League’s first State team that played against Adelaide in South Australia.  In that game she was awarded best on ground for WA.

During the years that Dhara played football, there was fierce on-field rivalry between Innaloo (now Claremont) and Carlisle (now Swan Districts).

Following Dhara’s death, the two teams decided that the first time they meet each season would be dedicated to Dhara’s memory.

The competition’s fairest and best award was subsequently named in her honour.