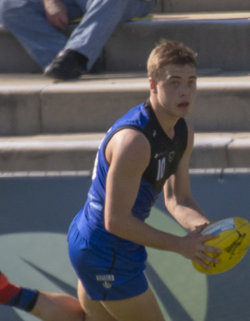 THE Finals in the Simply Energy Colts got underway on the weekend with Claremont advancing to within one more win of a Grand Final appearance while East Perth ended the season of Swan Districts.

The colts finals series got underway on Saturday morning and it was the minor premier Peel Thunder who got to sit back and let the other four finals teams do battle as they awaited to find out their opponent in the second semi-final next Sunday morning.

It was the elimination final that got things underway at Fremantle Community Bank Oval and East Perth proved too strong for a Swan Districts team that made the Grand Final in 2018. The Royals won 8.5 (53) to 4.5 (29) to keep their season alive and knock out the black-and-whites.

Then on Sunday morning at Joondalup's HBF Arena, it was a thrilling contest between Claremont and West Perth with the Tigers ending up prevailing 7.4 (46) to 5.11 (41).

That sees Claremont advance to the second semi-final which they will get to host at Revo Fitness Stadium on Sunday morning while West Perth plays East Perth in the cut-throat first semi-final at Leederville Oval.

Claremont and West Perth did battle over a place in the second semi-final when they faced off in tough conditions at HBF Arena on Sunday morning, and it was the Tigers who advanced in a tight contest.

Claremont finished the home and away season in the colts two games clear in second position on the ladder with an 11-5 record to be three games behind the minor premier Peel Thunder.

But the Tigers were two games and a significant percentage ahead of the third placed West Perth. There might have been a bit of a gap between them during the home and away season, but that wasn’t the case on Sunday morning at Joondalup.

It was one goal apiece in the opening quarter with Claremont holding a two-point edge at quarter-time before it was the Falcons that got on top with the advantage of the breeze in the second term.

West Perth kicked 2.6 from their eight scoring shots in the second quarter while Claremont only kicked 1.1 from their two attempts on the goal and that saw the Falcons head into the half-time break with a nine-point advantage.

Claremont gained the breeze behind them in the third quarter and the Tigers did take advantage as well kicking three goals. But by kicking a goal themselves, West Perth ensured they were still well in the contest with the Tigers only leading by four points by three quarter-time.

The scene was set for a tremendous finish and despite West Perth having the breeze behind them, Claremont did manage two goals in the last term and the Falcons could only manage the one major from six scoring shots.

That meant the Tigers held on for the 7.4 (46) to 5.11 (41) win to advance to the second semi-final against Peel Thunder, which as luck will have it they will get to play host to on Sunday morning at Revo Fitness Stadium.

West Perth has the double chance and will play Swan Districts this Sunday morning in the first semi-final at Leederville Oval.

The colts seasons of East Perth and Swan Districts went on the line when they met on Saturday morning at Fremantle Community Bank Oval, and it was the Royals who extended their 2019 campaign for at least another week.

Precious little separated the bottom four teams in the top five for most of the colts season with Peel Thunder the runaway leaders, but in the end it was East Perth and Swan Districts filling the fourth and fifth positions setting up Saturday's elimination final.

Swan Districts were coming off a Grand Final appearance in 2018 in the colts and they had fond memories of Fremantle Community Bank Oval too having beaten Peel in the preliminary final almost 12 months ago to book that place against Subiaco in the decider at Leederville Oval.

And the season did start well for Swans with them winning their opening seven matches before falling to Claremont in Round 10 at Steel Blue Oval.

From there, Swans won just one of the last eight matches but at least it was at Fremantle Community Bank Oval so it was a ground they had good memories of.

East Perth, meanwhile, had been knocking on the door of a top two finish for much of the season before losing their last two matches to East Fremantle and Subiaco, neither of whom made finals, to end up in fourth position.

The Royals made an impressive start on a ground they also won at during the home and away season against South Fremantle. East Perth kicked three goals to one in the first term to be up by 11 points at quarter-time.

East Perth stamped its authority further in the second quarter holding Swan Districts to just a point while kicking two goals themselves to be in control heading into the half-time interval leading by 25 points.

It was two more goals to one in the third quarter for East Perth and that saw the lead grow to 30 points by the last break.

The win keeps East Perth's season alive and they will now play West Perth in a cut-throat first semi-final at Leederville Oval on Sunday morning.

The season for Swan Districts comes to an end after it promised so much with those seven straight wins to open the campaign. But from there Swans ended up winning just one of the last 10 matches despite the encouraging signs in terms of the young talent emerging.

Seb Bright did all he could for Swans finishing with 25 possessions and 13 tackles while Kade Wallrodt finished with 23 disposals, Max Chipper 23, Brenton Hilton 21, Ethan Nordahl 18 and Jake Pasini 17.