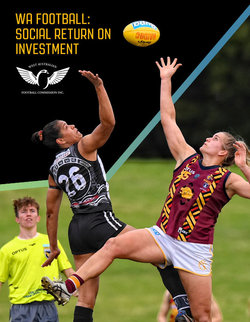 The West Australian Football Commission today officially launched the most comprehensive study ever into the economic and social benefits of local football to the WA community.

Completed by ACIL Allen, the report assesses the social and economic impact of club-based football in WA and provides a measurement tool that will enable the WAFC to track social impact on an annual basis.

In an industry-first, the report uses club-based participation as the key metric to quantify the social returns of the entire industry, which identifies that the broad range of community benefits from WA football include:

For every person employed by football directly, another job is created in the community.

Club-based footy generates an additional $225 million in social benefits to the community each year.

WAFC CEO Gavin Taylor said that being part of a footy club was about more than the game each weekend.

“We’ve always known the benefits of footy go beyond being a great game to play and watch. Now we have the research and findings to confirm this,” he said.

“It makes sense that being active and connected to a community though a club has mental health benefits.”

“What ACIL Allen have done is put numbers next to these and other benefits, which helps us appreciate just how important footy is to the WA community.”

“Football clubs bring together all parts of the community, young and old, from all walks of life, and supports them physically and mentally. This also helps to make them better parents, employees and members of our community.”

“On top of this, ACIL Allen found that every dollar spent by club-based football in WA creates two dollars of economic activity.  This is money spent in local communities, with local businesses, creating local jobs.”

“In total, the equivalent of more than 1,400 full time jobs are generated by football across WA.”

“I’m excited to present these key findings from ACIL Allen, marking an important milestone in our goal to connect and enhance WA communities through our great game.”

“This work will help us to remain focused on contributing more to communities right across WA, and provide a positive and meaningful impact to all who engage with football.”