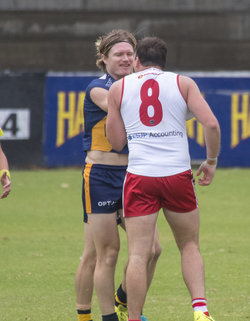 CLAREMONT co-captain Ian Richardson kicked six goals for the first time in eight years last week to almost put the Tigers into hosting position for this Saturday's qualifying final, but now his focus is an improved showing against South Fremantle.

As it turned out, Richardson's six goals that helped in Claremont's 106-point win over Swan Districts last week helped give the Tigers a superior percentage to South Fremantle.

So all Claremont needed was West Perth to kick one more goal to beat the Bulldogs at HBF Arena and the Tigers would finish up in second position and earn the right to host this Saturday's qualifying final.

But it wasn’t to be with South Fremantle holding on for the four-point win and now the Bulldogs and Claremont do battle at Fremantle Community Bank Oval with a spot in the following week's second semi-final against Subiaco at Leederville Oval on the line.

Coming into the game against Swan Districts, Claremont just wanted to build some momentum again coming into the finals following losses to South Fremantle and West Perth, and weren’t thinking about any chance of jumping into second spot.

For that to happen they needed to thump Swan Districts and hope South Fremantle lost to West Perth. They took care of the first part with the only 100-point result of the WAFL season but the Bulldogs held on to beat the Falcons by four points.

It never really crossed Richardson's mind either until Claremont piled on 12 goals in the third quarter at Revo Fitness Stadium, but when he saw South Fremantle won he quickly turned his attention to knowing the qualifying final would be at the port.

"Before the game we didn’t really think about it but once we kicked those 12 goals in the third quarter it was a tough," Richardson told 91.3 SportFM.

"Then we checked the scores after the game and South Freo got home by four points so it was only one kick the other way away from us having a home final. But it wasn’t to be and that's how it is. We'll go down to Freo Oval now on Saturday and try our best for another win."

Richardson has remained a key player throughout his career at Claremont but after he started out kicking big hauls of goals early on, he has turned more into a high leading half-forward in the second half of his career.

He was accustomed to kicking big bags early days including seven on four occasions, three of which took place in 2008 and the other in 2011, while he had also kicked six goals another three times but none since 2010.

So without having kicked more than five goals in a game since 2012, that all changed for the 31-year-old on Saturday afternoon at the newly named Revo Fitness Stadium as he turned back the clock against one of the great rivals of his career, Swan Districts.

Richardson finished the afternoon with quite the dominant display defying that he is now a 226-game veteran of the WAFL with 19 possessions 13 marks and six goal.

Even he didn’t quite realise it's been so long since he'd kicked six goals in a game, but he enjoyed the chance to play closer to goal and benefit of the work of the Tigers players further up the field.

"I didn’t realise it had been since 2011 so it had been a long time between drinks but it's always good to kick a few through the big sticks," he said.

"Obviously Swans were towards the end of their season and we are expecting a bit harder defence this coming week against South Freo, but you can't complain about a 100-point win when you kick six goals so we'll take that.

"It did feel good to get a couple of extra goals through the goal posts. We didn’t have Tommy Lee on the weekend so I was playing a bit deeper and closer to goal and the boys were bringing it in pretty nicely and kicking it out in front. The mids were obviously playing really well which obviously helps as well."

As enjoyable of a day as last Saturday was for Claremont against Swan Districts, Richardson's focus quickly turned to South Fremantle and this Saturday's qualifying final.

It's a chance for Claremont to get to a second semi-final in the WAFL for the first time since 2013 which proved to be the end of a remarkable era at the Tigers that saw them win four consecutive minor premierships, playing in three Grand Finals and win two premierships.

Claremont did record a good victory over South Fremantle on home soil back in NAIDOC Week, but in Round 19 it was the Bulldogs who proved too strong beating the Tigers by 33 points also at Fremantle Community Bank Oval.

That's still fresh in the mind of Richardson and his Claremont teammates, and they are confident of a bounce back performance and looking forward to getting another crack at the Bulldogs with the second semi-final spot up for grabs.

"South Freo were obviously really good that day and we were quite poor, and in the third quarter they kicked six straight and we just couldn’t stop their momentum," Richardson said.

"Obviously they've got some good players like Schloithe and those who got away from us. Higgins didn’t play last time so Jeremy Goddard is up for a good contest against him.

"But upon reflection, Harro put some footage together showing us that we weren’t playing like ourselves for whatever reason. But we feel like we got some confidence back on Saturday against Swans so we'll rip in and give it everything this Saturday."

As usual Richardson expects the midfield battle to decide the contest on Saturday and when the Tigers' on-ball brigade consists of the likes of Jye Bolton, Kane Mitchell, Declan Mountford, Ryan Lim and Jared Hardisty, he'll back them in to get the job done.

"We've got a couple of Sandover Medallists there and Bolts obviously had an awesome game on the weekend when he was back to his best," Richardson said.

"Kane's obviously had an outstanding season, Declan Mountford is a beast and Limmy is having a really good year too. Jared Hardisty is another one who has come back from injury recently and we really love the way he goes about.

"Most of those are inside bull type of players and we'd like to think that in the wet they can surge it forward and win the contested footy a lot. We're pretty confident they can win the battle on Saturday."