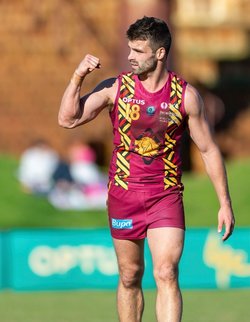 DESPITE his former teammate Mason Shaw leading most of the season, Ben Sokol stormed home in remarkable fashion for Subiaco to claim the Bernie Naylor Medal for 2019 which could lead to an AFL future.

Ever since Sokol left South Fremantle following the 2015 WAFL season to join Subiaco, he has continued to grow and improve year on year, and now without question 2019 has been the year of his burgeoning career to date.

On the back of kicking 49 and 43 goals the past two years respectively with the Lions, Sokol was having another good year right throughout 2019 which included playing for the WAFL State Team against South Australia where he kicked four goals.

Up until the end of Round 12, he was having a good year having kicked 17 goals but it's fair to say he sure turned it on from that point on.

Sokol kicked three goals against East Fremantle in Round 13, two in Round 14 against Claremont and then four against West Perth in Round 16 to take him to 26 goals over the opening 14 matches.

But the South Coogee product was just getting warmed up and his goal kicking feats over the last month of the home and away season had to be seen to be believed, turning back the clock to earlier this century and the likes of Brad Smith, Troy Wilson and Chad Jones.

Sokol equalled his career-best with seven goals in difficult wet conditions under lights at Lathlain's Mineral Resources Park against Perth in Round 17 but it was far from a one-off standout game to close the season for the 23-year-old.

Sokol booted another six goals to go with 22 possessions and 12 marks in Round 18 against Swan Districts, backing it up with 16 touches, 11 marks and six goals against West Perth, and then on Saturday to close the season, 15 disposals, 13 marks and six more goals.

But it was still a thrilling finish in the race for the Bernie Naylor Medal for 2019 with Sokol locked in the battle with his South Fremantle colts premiership teammate from 2012, Mason Shaw.

Shaw kicked another six goals on Saturday against West Perth to move to 49 goals on the season to lay down the marker, but Sokol matched that feat with six goals of his own against the Royal to move past the half-century mark to secure the Bernie Naylor Medal.

Sokol's season continues to prove that he made the right decision to join Subiaco from South Fremantle back at the end of 2015.

On the back of premiership winning colts career with the Bulldogs, Sokol graduated to play nine league games in 2014 and at that stage as a lively half-forward, he looked a likely type to become a regular moving forward with South Fremantle.

But it wasn’t to be as he managed just two league games in 2015 while settling in the reserves where he kicked 39 goals and played in the premiership winning team of that year.

However, Sokol was craving the chance for more league football and Subiaco saw a future in him and he made a bright start to 2016 at the Lions kicking 22 goals in 12 games before missing the majority of the second half of the season through injury.

But he was back in 2017 and cemented his spot in the Subiaco forward-line forming an impressive duo with Liam Ryan. Sokol would kick 49 goals for the season and be part of the Grand Final team that lost to Peel, kicking four goals on the last match held at Subiaco Oval.

There was no Ryan in 2018 but Sokol continued to be the standout forward for Subiaco going on to kick 43 goals in the Lions' undefeated season and he would kick five goals in the Grand Final as he completed the rare triple as a WAFL colts, reserves and league premiership player.

Now his 2019 season has seen Sokol go to another level kicking the 51 goals for Subiaco on top of four in the State Game.

With his versatility and ability to be a remarkably strong overhead mark for his size, good on the lead, impressive at ground level and a good converter, there's every chance AFL clubs will seriously consider giving him a chance coming into 2020.