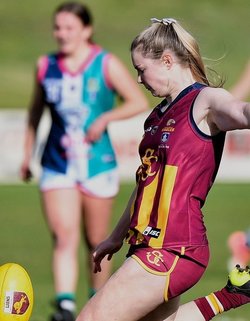 THE first ever WAFL Women's finals series begins this Sunday with Subiaco and East Fremantle battling for a Grand Final berth while Swan Districts and Claremont are fighting just to stay alive.

It was quite the successful and eventful inaugural edition of the Optus WAFLW Premiership Season with the five competing teams all chock full of talent and in the end only Peel Thunder now eliminated with the finals to begin this Sunday afternoon.

Both semi-final match ups take place this Sunday afternoon and by Sunday evening, we will have the team qualified for the first ever WAFLW Grand Final and we will have a team who has been eliminated.

The first game takes place at Bassendean's Steel Blue Oval and that will be the first semi-final between Swan Districts and Claremont. The winner will advance to the preliminary final while the loser's season will be over.

Swan Districts had the bye in the final round and that saw them lose second position, but they still finished third with a 7-5 record and enter the finals on a three-game winning run after victories against Claremont, East Fremantle and Peel Thunder.

Claremont, meanwhile, finished the season in fourth position with a 6-6 record after a 13-point loss to East Fremantle last week following a goalless performance in a loss to Subiaco the week before.

Swan Districts and Claremont met three times during the home and away season with Swans winning all three of the contests by 36 points in Round 2 at Steel Blue Oval, 14 points at Claremont Oval in Round 7 and then 52 points in Round 12 back at Bassendean.

Swan Districts captain Ebony Antonio has been a handy late season inclusion for the black-and-whites with the Fremantle Dockers AFLW star looking forward to seeing what Swans can produce come finals time.

"It's a pretty cliché saying but finals footy is a different kind of footy. We have a one in four chance to get ourselves there but at the same time it's a really good opportunity to be here and in this brand new competition, the WAFLW," Antonio said.

"We have just approached every game this year focusing on ourselves and then come Friday we start to look at the opposition and watch some of their vision. We know that Claremont are really good at moving the ball and they've got some really good inside players.

"Then when they get it up forward they can be really good as well so our defence will have a big job this weekend to play some good defence."

Claremont's Kate Orme knows that the job is ahead of the Tigers, but if they can move the ball well going forward she sees no reason they can't be a chance.

"We'll have to play some really tough footy. Swans move the ball well and they compete really fast, and their skills are really good," Orme said.

"We'll probably have to win it at the coal face, that will be our main priority, and use it from there. For us our main focus has been on moving the ball and getting it inside forward 50.

"Our mids are quite strong and that's an area we really rely on and it's about putting together that next step of moving it towards the big sticks."

The second semi-final then takes place at Leederville Oval with a Grand Final spot on the line between Subiaco and East Fremantle.

The winner will move straight into the Grand Final while the loser will host the preliminary final next week against the winner of the Swan Districts-Claremont first semi-final.

Subiaco and East Fremantle met in last year's final WAWFL Grand Final as well with the Sharks prevailing in that, and now the two teams have ended up in the top two positions at the end of the inaugural WAFLW season in 2019.

The Lions have been the dominant team all season in the inaugural WAFLW campaign and that saw them finish as minor premiers two games clear on top of the ladder with a 9-3 record and the best percentage in the competition.

The Lions come into the finals on the back of a 73-point win last week against Peel after holding Claremont goalless the week before in a 49-point victory.

East Fremantle, meanwhile, secured second position with a 13-point win over Claremont last Saturday morning to finish with a 7-5 record to be percentage ahead of Swan Districts.

Subiaco's Hayley Miller knows that East Fremantle will be a tough test but she's looking forward to getting the finals underway.

"I think we match up on them quite well and the last time we played them it was a pretty close contest, but unfortunately they got on top of us then," Miller said.

"But having come off a few good wins, we'll come into the game with a lot of confidence and we'll concentrate a lot on what we're going to do, and what our game plan is and the rest should take care of itself.

East Fremantle's Evie Gooch is glad that the Sharks ended up in second position to earn a finals doubles chance but hopes they don’t need it.

"Last weekend we were just looking for the win to get ourselves into second spot so now that this weekend we've got a second chance if we don't come up against Subi as well as we should," Gooch said.

"But we are pretty confident in what we've got at the moment and are looking forward to this weekend."

Meanwhile in the WAFLW Reserves competition, both semi finals will also take place on Sunday with the second semi-final featuring Claremont and South Fremantle being played at Steel Blue Oval from 11am.

The first semi-final will then be played at Leederville Oval on Sunday from midday between East Fremantle and Peel Thunder.

And then in the Rogers Cup Youth Girls competition, South Fremantle and Peel Thunder meet in the second semi-final on Sunday at 9.30am at Steel Blue Oval.

The first semi-final will be played between Subiaco and East Fremantle on Sunday from 2pm at Leederville Oval.