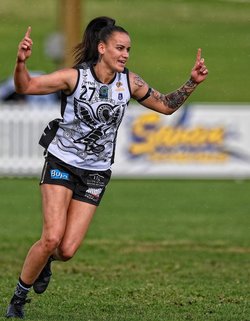 THINGS are getting decidedly interesting in the Optus WAFL Women's competition with wins for Swan Districts and East Fremantle in Round 9 on Saturday meaning that the top four teams are only separated by one match.

Subiaco had looked like a runaway leader in this inaugural WAFLW season, but with their loss to Swan Districts on Saturday all of a sudden things are remarkably tight following nine rounds of the campaign.

Both Round 9 WAFLW matches on Saturday were played to celebrate NAIDOC Week as well, paying tribute to Aboriginal culture and the Indigenous contribution to the game.

That saw all four participating teams wearing spectacularly designed jumpers and then the two games provided some fascinating action on the field as well.

The first game of Round 9 in the WAFLW competition took place on Saturday morning at Mandurah's David Grays Arena. That saw East Fremantle prove too strong for Peel Thunder, winning 6.10 (46) to 1.1 (7).

The second match of the round took place at Bassendean's Steel Blue Oval and that saw Swan Districts knock off Subiaco 5.6 (36) to 3.4 (22) to bring the competition to life.

That means that at the conclusion of Round 9, Subiaco remains on top of the WAFLW ladder with a 5-2 record but it's then remarkably tight with only percentage separating East Fremantle (4-3), Swan Districts (4-4) and Claremont (4-3) while Peel Thunder are further back with one win and six losses.

Peel Thunder and East Fremantle had the early starting clash in Round 9 of the WAFLW competition on Saturday morning as they did battle at Mandurah's David Grays Arena.

In the end even though Peel started well and kicked the first goal of the game and the only goal of the first quarter, it turned out to be a commanding performance from East Fremantle over the last three quarters.

East Fremantle managed just the three behinds in the first quarter but then kicked two goals in the second term to go with four behinds. Peel didn’t manage a score and the Sharks went into the half-time break with a 12-point advantage.

The Sharks would continue to control the contest throughout the second half as well as they held the Thunder scoreless.

East Fremantle kicked three goals in the third quarter to go into three quarter-time leading by 32 points. The Sharks added another goal in the last term and that saw them run out 6.10 (46) to 1.1 (7) winners having held the Thunder scoreless over the last three quarters.

It was an important win for East Fremantle as well as they improved to a 4-3 record on the season to sit in second position on the WAFLW ladder.

They have the second best percentage in the competition as well to ensure they sit ahead of Swan Districts and Claremont who are also on four wins for the season after nine rounds.

Meanwhile, Peel is now 1-6 following the loss on home soil.

Ashton Hill, Atkins, Kimberley Bowey, Philipa Seth, Evangeline Gooch and Sharon Wong were all terrific on the day as well for the Sharks.

Subiaco might have been the standout WAFLW team so far this season but Swan Districts opened up the competition significantly with their tremendous performance at Steel Blue Oval on Saturday afternoon.

The game was held at the Bassendean venue from midday as the lead-in to the WAFL clash in the afternoon so there was a good crowd in attendance and they saw a tremendous contest in the WAFLW.

Subiaco had been the dominant team so far in the WAFLW competition coming into Saturday's game having won five of their six matches. Those five wins against Swan Districts, East Fremantle, Peel Thunder, Claremont and East Fremantle by an average of 32.2. points.

Swan Districts, meanwhile, had lost narrowly to East Fremantle by eight points the previous week coming off a 14-point win over Claremont so they were starting to build some impressive momentum.

Subiaco then started the game with the only goal of the opening quarter. Both teams had two scoring shots apiece but the Lions kicked 1.1 and Swans just the two behinds.

Swan Districts responded well by kicking two goals in the second quarter and just the one from Subiaco to see the black-and-whites hold a one-point advantage heading into the half-time break.

It was then a goal apiece in the third quarter with Swan Districts maintaining a one-point advantage at three quarter-time.

The game was well and truly up for grabs at the last change but then Swans dominated the final term by having the only three scoring shots and kicking two goals from those to pull away for the 5.6 (36) to 3.4 (22) victory.

The result was a big one in the context of the WAFLW season. The victory improves Swan Districts to a 4-4 record to sit in third position while Subiaco's hold on top spot has lessened with the Lions now holding a 5-2 record.

Gemma Houghton delivered a best on ground, match-winning performance for Swan Districts to end up kicking three goals in a dominant display.

Shanae Davison and Hayley Cole kicked the other goals for the black-and-whites.

Claire Ortlepp, Sara Lewis, Danika Pisconeri and Lara Filocamo were among the best players on the day for the Lions.