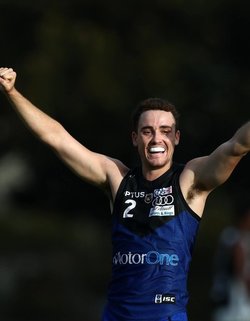 NAIDOC Round in the WAFL on Saturday not only saw the competition pay tribute to the contribution of the Aboriginal culture, but also saw five fascinating match ups with Subiaco and Claremont surging ahead while West Perth, West Coast Eagles and East Perth won important games.

All five matches took on greater significance as the race for the finals heats up in the WAFL in Round 13 action and there were a host of standout individual performances to go along with the big results from a team perspective.

Then in the annual NAIDOC Week fixture between Claremont and South Fremantle, the Tigers kicked nine goals to two after half-time to beat the Bulldogs 12.6 (78) to 9.8 (62).

That's five straight wins for the Tigers and three consecutive losses for the Bulldogs with Claremont now preparing for this Sunday's clash with Subiaco at Leederville Oval.

Swan Districts' struggles of playing out four quarters continued too at Steel Blue Oval with East Perth coming from behind to keep their season alive with an 8.17 (65) to 8.9 (57) win.

The last game of the round saw Subiaco flex its muscles to beat East Fremantle for an eighth consecutive time, winning 17.14 (116) to 7.4 (46) at Leederville Oval.

The NAIDOC Round results leave Subiaco (11-1) clear on top of the ladder ahead of Claremont (9-3) and South Fremantle (8-4).

PLAYER OF THE ROUND – JACKSON RAMSAY
East Perth scored a hard-earned yet crucial victory over Swan Districts on Saturday and there was no better player on the field than Jackson Ramsay.

The East Perth initially returned to the Royals for the start of the 2018 season but that campaign was over before it ever really got started when he ruptured his ACL and required a knee reconstruction.

But he was up and going for the start of the 2019 season with East Perth returning to be a standalone club, and in the 10 matches he has played for the season he has been tremendous splitting his time between coming off half-back and stints in the midfield or wing.

His ability to run and carry the ball, win it in tight and on the outside, and then to use it especially well by foot have made him a crucial member of the East Perth line-up.

He came through the ranks at East Perth before being drafted by Collingwood and over four years, there were times where he strung together some good enough form at AFL level to suggest he had a long career ahead of him.

In the end, Ramsay played two matches for the Magpies in 2014, five in 2015, two in 2016 and eight in 2017. His most consistent run of form was that stint of eight straight matches in the back half of the 2017 season, which including a career-high of 25 possessions against the Western Bulldogs.

But he couldn’t hold his place on the 'Pies list at the end of 2017 after 17 matches and then returned to East Perth before the devastating blow to open 2018 with the knee injury.

However, he has picked up tremendously in 2019 for the Royals and was rewarded with selection in the WAFL State Team that played against South Australia at Optus Stadium.

Then on Saturday in a must-win game for East Perth against Swan Districts at Steel Blue Oval, Ramsay was brilliant with a best on ground performance made up of 38 possessions, 10 tackles, seven marks and seven inside-50 entries. 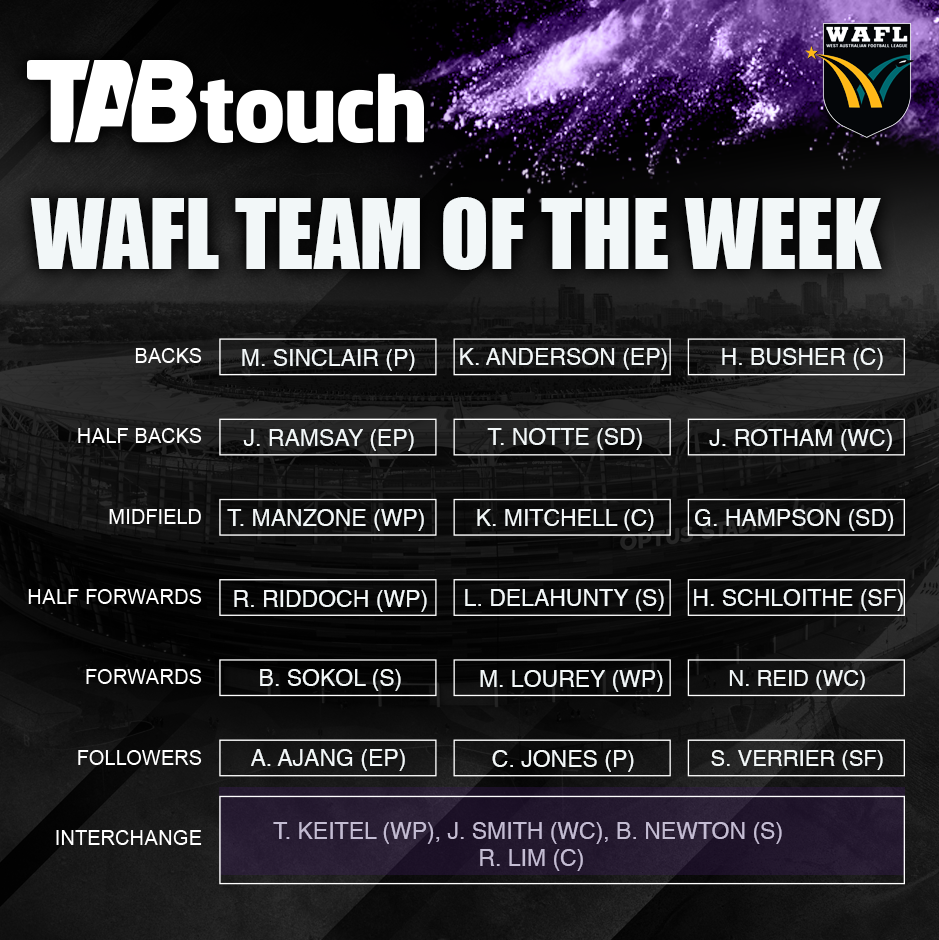 BACK POCKET – MICHAEL SINCLAIR (Perth)
He continues to be the standout intercept and rebound defender in the competition with the dual fairest and best winner enjoying the best season of his career that has included already him playing state football and reaching 100 WAFL games. Despite the loss to West Perth, he still produced 34 possessions, five marks, five tackles and three inside-50 entries.

FULL-BACK – KYLE ANDERSON (East Perth)
Continues to show that when healthy he is one of the very best defenders in the competition. Put in a tremendous showing leading the Royals from full-back on Saturday in the win against Swan Districts in his 122nd appearance. Not only did he blanket his opponent but also had 14 possessions and nine marks himself.

BACK POCKET – HAYDN BUSHER (Claremont)
With Anton Hamp moving forward, somebody had to step up defensively for Claremont at full-back to play on South Fremantle's Bernie Naylor Medal leader Mason Shaw, and he got the job and did a tremendous job. He kept his opponent to just the one goal while having 16 possessions and nine marks himself.

CENTRE HALF-BACK – TONY NOTTE (Swan Districts)
What a warrior he continues to be at Swan Districts despite the losses now beginning to mount in 2019. With 231 games under his belt, he remains right at the peak of his powers and produced another performance on Saturday against East Perth that consisted of 23 possessions and nine marks.

HALF-BACK FLANK – JOSH ROTHAM (West Coast)
The West Coast Eagles are in tremendous WAFL form as a team now and he is at the forefront of that in the back-line. He remains unlucky to not be in the Eagles' AFL team but that is a hard team to break into and all he can do is continue to bang the door down. Was tremendous again in the win over Peel with another 19 possessions, six marks and three tackles.

WING – TRENT MANZONE (West Perth)
He is now an experienced West Perth midfielder with 116 games with the Falcons under his belt and his consistency in recent seasons has been tremendous. He might not get the attention because of the likes of Shane Nelson and Aaron Black, but his consistently strong form deserves recognition and he had another 26 possessions and two goals in Saturday's win against Perth.

CENTRE – KANE MITCHELL (Claremont)
The 2012 Sandover Medal winner and dual premiership player is right back to his very best form now in 2019 in his second season back with Claremont. Just continues to run harder and longer than anyone else in the competition which saw him finish Saturday's win over South Fremantle with 36 possessions, 12 tackles, four marks and three inside-50 entries.

WING – GEORGE HAMPSON (Swan Districts)
He will rightfully feel frustrated that he continued the best and most consistent 18 months of football in his career in a team that looks destined to claim the wooden spoon like his East Fremantle side did last year. But he continues to work his backside off and on the back of winning the Lynn Medal last year, is right on track for the Swan Medal in 2019 after another 28 possessions, four tackles and two goals.

CENTRE HALF-FORWARD – LACHLAN DELAHUNTY (Subiaco)
Another standout performance from the WAFL's benchmark versatile big man. Continues to split his time in the ruck and up forward, do so at the moment with Clancy Wheeler, and it's working a treat for Subiaco especially in the middle of winter with the game played less in the air. Had another 30 possessions, 19 hit outs, 10 marks and two goals in win against East Fremantle.

HALF-FORWARD FLANK – HAIDEN SCHLOITHE (South Fremantle)
South Fremantle might have suffered its third successive loss at the hands of Claremont on Saturday but the 2017 Sandover Medallist was at his brilliant best with his clean hands and quality disposal on a day where both teams struggled for much of that in tricky conditions. He finished with two goals to go with 26 possessions and six tackles.

FORWARD POCKET – BEN SOKOL (Subiaco)
Hasn’t quite been able to recapture his form in attack for Subiaco since the State game that he showed before it but regained some of that confidence on Saturday with a strong showing against East Fremantle. Kicked three goals to go with 19 disposals and 11 marks.

FULL-FORWARD – MICHAEL LOUREY (West Perth)
He might not have kicked the number of goals the last couple of years as he did when he first arrived at West Perth from VFL club Frankston back in 2015, but with Tyler Keitel moving into the ruck, he stood up impressively in attack in Saturday's win against Perth. He kicked four goals from 16 touches and seven marks.

FORWARD POCKET – NICK REID (West Coast)
Having not played in the WAFL system since 16 games with Claremont's colts in 2014, he has proven perhaps the best of West Coast's top-up players in the competition this season and he provided a terrific target in attack in Saturday's win against Peel in Mandurah. He kicked four goals from 22 disposals, seven marks and five inside-50 entries.

RUCK – AJANG AJANG (East Perth)
He is getting the chance now to have a run at being East Perth's No. 1 ruckman and is showing enormous potential in that role. Was up against a quality opponent in Swan Districts' Corey Gault on Saturday but had the better of the duel with 21 possessions, 24 hit outs, 10 marks, four tackles and a goal.

RUCK ROVER – CLINT JONES (Perth)
The former Perth skipper, South Fremantle premiership player and fairest and best winner at both clubs is showing no signs of slowing despite having now played 153 WAFL games on top of the 149 he played in the AFL with St Kilda. Despite the loss to West Perth, he had 37 possessions, six marks and two tackles.

ROVER – STEVE VERRIER (South Fremantle)
Now that his body is allowing him to have a good run at it, he is showing what a quality and versatile player he is in whatever role asked to play for South Fremantle. Spent most of the day in the midfield against Claremont and he produced 30 possessions, six marks, five tackles, five inside 50s and a goal in his 99th WAFL appearance.

INTERCHANGE – TYLER KEITEL (West Perth)
Split his time again between playing in the ruck and up forward in Saturday's important win for the Falcons against the Demons. He produced an impressive showing in both roles too to end up kicking three goals to go with 23 possessions, 10 marks, 10 hit outs and six tackles.

INTERCHANGE – JOSH SMITH (West Coast)
Fresh off being named Player of the Round, he backed that up with another strong showing in the Eagles' win against Peel on Saturday. Is another player who can't do much more to try and break into the AFL side and if he gets another chance, he'll do so in outstanding form following another 30 possessions, seven inside 50s, five marks and four tackles.

INTERCHANGE – BEN NEWTON (Subiaco)
The hard-running goal kicking wingman has battled injury his past two seasons back with Subiaco, but when healthy he continues to prove to be one of the most damaging players in the competition. Showed that in spades on Saturday against East Fremantle with 26 possessions, eight inside-50 entries, five marks, four tackles and two goals.

INTERCHANGE – RYAN LIM (Claremont)
He might have had teammates that racked up more of the ball but nobody worked harder than him and in what was a tough and physical contest with second spot on the line against South Fremantle, he was right at the forefront of it. To go with his 18 possessions, he laid 18 tackles, took five marks and kicked a goal in the win for the Tigers.

UNLUCKY BUNCH
There were plenty of players who delivered tremendous performances across Round 13 but couldn’t quite fit into the Team of the Round, including: