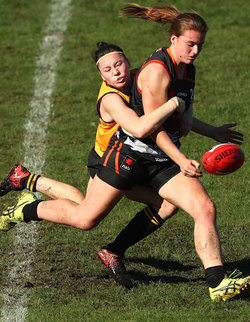 Western Australia have overcome the Central Allies to record their third victory in four matches at the AFLW U18 National Championships in Queensland.

A three-goal blitz in the second quarter set the tone for the fixture, with the Central Allies unable to score a goal after the first break.

Nyra Anderson and Mikayla Bowen accumulated plenty of the ball to finish with 24 and 22 disposals respectively, while the goals were spread evenly amongst the side.

Allies started the better of the two teams kicking the first goal of the fixture and heading to the first break eight-points to the good.

The second term is where WA stamped their authority on the fixture.

Isabella Lewis, Mikayla Morrison and Jade Briggs all converted to take Western Australia to a 10-point lead at the main interval.

The third quarter became a tight arm-wrestle between the sides, with goals hard to come by in the slippery conditions.

Mikayla Hyde added a goal in the last minute of the term to extend the WA lead to 16-points.

Bowen finished off her strong performance with a goal in the last, as WA finished 22-point victors in Southport.

The side will take on Vic Country in their final match of the carnival on Friday at Bond University.