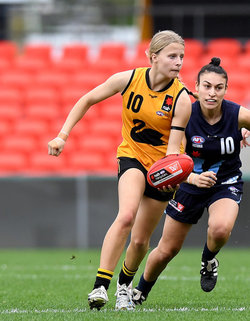 Western Australia have suffered their first loss of the AFLW U18s National Championships, going down to Vic Metro by 17-points at Metricon Stadium on Monday.

Roxanne Roux was the only multiple goal-scorer for WA, while captain Mikayla Bowen stood out with 15 touches and 10 tackles for the match.

Vic Metro started the fixture on the Gold Coast in fantastic fashion scoring three goals inside the first four minutes, before WA stemmed the flow late in the opening term.

Roux managed to get WA on the board early in the second quarter, however the black and gold had no answer to Vic Metro’s midfield, going into the break 25-points down.

Despite only scoring one goal in the third, WA started the last quarter full of confidence, with Lily crumbing the back to finish from close range.

Mikayla Morrison made it two in two minutes for WA, taking a huge pack mark deep in the forward 50, before converting to narrow the margin to three goals.

Bianca Webb proceeded to kick one of the goals of the tournament thus far, steering through a kick from tight in the boundary to make it a two-goal game.

However, Vic Metro sealed it late to run away 17-point winners.

Western Australia are 2-1 after three games in the Championship and will next face the Central Allies in Southport on Wednesday.