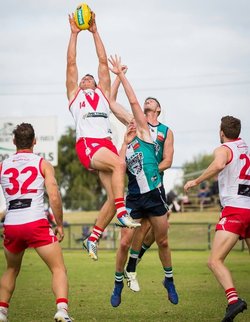 THERE were just the two matches in Round 10 the WAFL on the weekend with a game on each day with South Fremantle winning with the last kick of the day against Peel Thunder and Swan Districts again being overrun, this time at the hands of Claremont.

Following the three matches in Round 9 of the WAFL with wins for Subiaco, West Perth and East Fremantle against Perth, the West Coast Eagles and East Perth respectively, all six of those teams took a seat on the weekend.

The four teams that had the bye in Round 9 then took part in the two matches in Round 10 across Saturday and Sunday afternoons.

The first game took place on Saturday afternoon at Mandurah's David Grays Arena. South Fremantle was on top most of the afternoon but then Peel Thunder responded and appeared to have the game won.

That was until dual Peel premiership player Nick Suban kicked the game-winner for South Fremantle to give the Bulldogs a seventh successive win as they prevailed 10.14 (74) to 11.5 (71) over the Thunder.

The second game of Round 10 took place on Sunday afternoon at Bassendean's Steel Blue Oval and once again Swan Districts started promisingly and threw down the gauntlet to their opponents.

Peel Thunder and South Fremantle were both fresh coming into Saturday's clash in Mandurah and in the end it produced a thrilling finish with a dual Peel premiership player kicking the winning goal to extend the Bulldogs' winning streak.

Both teams were coming off the bye in Round 9 after playing in the WA Day Round which saw Peel suffer a hefty loss on the Sunday to Subiaco and then South Fremantle overcome injuries to key players to beat East Fremantle by 32 points in the Foundation Derby.

That set the stage for an intriguing battle at David Grays Arena on Saturday with Peel needing a win to try and break back into the top five and South Fremantle looking to maintain pace with Subiaco ahead of next Saturday's top-of-the-table battle.

Peel started promisingly with the opening goal of the game thanks to Bailey Banfield but that would be their only score of the first term. South Fremantle would kick two goals through Brendan Verrier and Mason Shaw, but they also kicked five behinds to limit their advantage to 11 points.

The Thunder's accuracy did keep them in the contest in the second term with the home side kicking three goals for the quarter with two of those courtesy of Harley Bennell as he closes in on an AFL return with Fremantle.

One of those was a stunning effort on the run which fully put his troublesome calves to the test.

But South Fremantle also kicked another three goals for the second quarter to see the visitors extend their lead to 14 points by half-time.

South Fremantle's lead then grew to 20 points to start the second half with a quick goal to Zac Strom, but Peel soon responded in kind thanks to Corey Morris.

The Bulldogs twice reclaimed a 20-point lead after goals to debutant Kyle Hamersley and then Shaw, but then the Thunder picked up momentum for the first time in the contest to finish the third quarter with two goals to Cam McCarthy and another to Hugh Dixon.

That meant South Fremantle had just a two-point lead by three quarter-time and then Peel took the advantage to start the fourth term when McCarthy kicked his third goal in no time.

Banfield soon added a second and the Thunder were up by nine points, but the Bulldogs wouldn’t be denied.

Strom's second goal made it a two-point ball game at the 22-minute mark and then three minutes later, Nick Suban became the hero when he kicked the match-winning goal for South Fremantle against the team he played in the 2016 and 2017 WAFL premierships with.

Mason Shaw continued his outstanding form as the best key forward in the competition so far in 2019, kicking another four goals for South Fremantle from 11 kicks and eight marks.

Zac Strom provided a terrific second marking option in attack for the Bulldogs too booting three majors from 16 possessions and nine marks.

On top of kicking the winning goal late in the piece, Nick Suban produced a best on ground display for South Fremantle made up of 26 possessions and 11 marks.

Cam McCarthy had a purple patch either side of three quarter-time to kick his three goals for the game for Peel but he had just six kicks the rest of the afternoon.

Sunday's standalone Round 10 WAFL fixture took place at Steel Blue Oval with Swan Districts desperate to win to keep its finals hopes alive while Claremont was out to build on its momentum from two weeks earlier.

Both teams had the bye in Round 9 following playing on the WA Day long weekend which saw Swans once again put in a competitive performance to have a chance of winning before being overrun by Perth.

Claremont then put in a dominant performance for three quarters to beat the West Coast Eagles by 31 points at Optus Stadium to consolidate their place in the top five.

So both sides met at Steel Blue Oval on Sunday with at least a two-week break behind them and it was Swan Districts who kicked with advantage of the strong Bassendean breeze in the opening quarter.

The black-and-whites took full advantage too with the only three goals of the opening quarter. The first came courtesy of George Hampson with a beautiful kick from almost 50m out near the boundary when he bravely took advantage.

A minute later he kicked well again on the run before Tristen Raynor goaled shortly before quarter-time to give Swan Districts a 19-point advantage at the first break.

Claremont had the breeze in the second quarter and it took less than six minutes for them to kick two goals thanks to Jack Bradshaw and Tom Lee.

But Swans did get a steadier for the first goal of the game into the breeze with Leigh Kohlmann kicking truly at the 20-minute mark. Claremont, though, did boot the last goal of the half through Ian Richardson to cut Swan Districts' lead to eight points at the major break.

Claremont then took the lead to start the second half when Bailey Bennett kicked the first goal of the third quarter at the 11-minute mark.

But three minutes later Swans regained the lead when Mitch Howlett kicked truly for his second goal in black-and-white. Swan Districts couldn’t manage another goal for the quarter, though, with Claremont goaling through CJ Oakley to take a one-point lead into the last term.

It was then all Claremont in the last quarter in another frustrating finish to a game for Swan Districts which saw their hard work all afternoon undone with a largely non-competitive final term.

Claremont had nine scoring shots to one and kicked six goals to one in the last quarter to go from one-point in front at three quarter-time to win the game by 34 points.

Meanwhile, Swan Districts slipped to 2-7 on the season and despite the positive of being largely competitive in all seven losses, the fact they just can't put four quarters together, or ultimately win enough of the ball or kick a winning score continues to frustrate the black-and-whites.

Despite a tremendous battle all afternoon with Tony Notte, Tom Lee managed to finish up kicking five goals from nine kicks and five marks for Claremont.

Kane Mitchell delivered a standout best on ground display for the Tigers amassing 38 possessions, 11 tackles, six marks and five entries inside the forward 50 while Swans tried to focus on nullifying the impact of fellow Sandover Medallist, Jye Bolton.

Bolton still had 30 possessions despite copping a heavy knock in a tackle in the third quarter with Ryan Lim finishing with 30 disposals, eight tackles and seven marks for the Tigers.

George Hampson delivered another standout performance for Swan Districts made up of 32 possessions, six marks, four tackles and the first two goals of the game.

But ultimately once more, he just didn’t get enough support which he might be getting used given it was a similar case at East Fremantle last year when he won the fairest and best award.

Tony Notte was his usual tremendous self in a tantalising battle with veteran Claremont forward Tom Lee. Despite Lee kicking five goals, Notte couldn't have done much more and had 19 possessions and five marks himself.