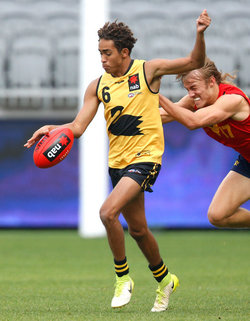 South Australia was more accurate in front of goal than WA, which proved to be the difference in the result.

Riley Garcia, Jeremy Sharp, Elijah Taylor, and  Tyrone Thorne all kicked one goal each for the home team.

South Australia got off to a great start when Jackson Mead took a strong contested juggling mark inside 50. He then duly converted for the first goal of the game. Jeremy Sharp scored the instant reply for Western Australia, when he was able to dance his way around an opponent before drilling a goal from 50 metres out.

At the start of the second quarter, Kysaiah Pickett weaved his way around opponents before finding Callum Park inside 50. Park went back and slotted the opening goal of the quarter to give the Croweaters a five-point lead. WA then had a host of attacking chances, but South Australia’s defence stood up tall. However, in the fourteenth minute, Elijah Taylor produced a moment of magic, when he got the ball out of a pack and snapped through his first goal of the game.

After the main break, Darnell Tucker got the visitors off to a good start when he snapped through a goal. Kysaiah Pickett produced a moment of magic when he snapped through a miraculous goal from right on the boundary line. Cameron Tahney followed up for the visitors with two goals to push the margin out to 21 points. Tyrone Thorne roved a pack expertly and dribbled through a goal to keep WA within touching distance of South Australia.

The final quarter proved to be a stalemate early, until Riley Garcia snuck through a goal in the tenth minute to reduce the margin to just nine points. However, in the 22nd minute, Corey Durdin dribbled through the goal to seal victory for the visitors.

Next week, WA travels to Adelaide to take on the Allies at Alberton Oval, where they will be looking to bounce back.