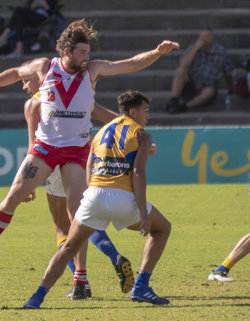 BROCK Higgins has found himself rejuvenated by the young blood coming through at South Fremantle so far in 2019 and as he reaches 100 games with the Bulldogs, he can't wait to see how far the new generation can take the club.

That meant there was plenty of unknowns surrounding the Bulldogs coming into 2019, but now they hold a six-game winning streak and 7-1 record heading into Saturday's Round 10 clash with Peel Thunder in Mandurah which doubles as Higgins' 100th South Fremantle game.

Higgins admits the pre-season was decidedly different without all those familiar experienced faces, but now as 2019 has rolled on, he's enjoyed seeing the new generation step up and grab their chances with the Bulldogs to show what they are capable.

"It was very different without all those guys, different good and different bad in some ways. We didn’t have Cooky out there running around like an idiot telling me what to do all the time, which was alright," Higgins said.

"But it was good in the way that it was a new group who was all very eager to take their chances. Obviously those guys who left were massive for the club for years and such big personalities as well, so when they left it sort of left a vacuum so you have all the young blokes now trying to fill that void which is so exciting.

"Jakey Florenca has been one this year who has stepped up massively and he actually talks to me now, which is good."

The depth has always been a strength at South Fremantle which is why there wasn’t seen as a great need to go out and recruit heavily to cover for the departed players.

Now Higgins continues to enjoying seeing a host of players make the most of opportunities they have waited patiently to come their way.

"We've always had a very strong reserves team and made a few Grand Finals in my time here so we've always had young talent there who have been ready to go," he said.

"For a lot of them, it's their third, fourth and fifth year of training with the squad and playing senior footy so now that those blokes have left they can slot straight in there.

"And because they've been training with us so long they fit in seamlessly and they are so eager to make their mark on the competition. I don’t think it has surprised me how well we've gone so far, but a few players have surprised me with how much they have stepped up."

Having been so close to a Grand Final appearance in each of the past three seasons, Higgins had no trouble having high expectations again coming in 2019.

While things are going well so far even including a win over Subiaco, he knows it counts for little until they get to finals and perform when it matters most.

"I go into every season thinking we're going to win a flag and if you don't think like that, there's not much point playing footy anymore, that's just how I think," Higgins said.

"I go into every game thinking I'm going to kick 10 goals too but that never happens. But that's sort of my mindset, I don’t think there's any point in a rebuild year. You are either all in or you might as well just quit.

"It's halfway through the year to be honest, so we know nothing. We've had a pretty horrid run with injuries as well to start the year so if that continues, who knows where we'll end up.

"Beating Subi was great, but you've got to remember it was on the Saturday after they had the state game where five or six of their boys played.

"You take a lot out of it, but at the same time it's halfway through the year and we always just concentrate firstly on making the finals and then reassessing. This year is no different."

Higgins has now played 130 WAFL games but Saturday will be his 100th with South Fremantle having started his career at East Perth and making those initial 30 appearances.

But it's at South Fremantle where Higgins has made his mark since arriving in 2014 and having been such a key part of developing the strong culture that has seen the Bulldogs reach three consecutive preliminary finals and currently sit second in 2019, getting to 100 games with the club means the world to him.

"The 100 games at South means a lot more than the 100 overall games for sure just because a lot of my mates have got their names on lockers and have since retired, so it will be nice to know that when I leave I've left my mark on the club in some way," Higgins said.

"I'm just happy that I've been able to find a home like I have at South Fremantle, and it's just stuck. I love the place and it's sort of responded in kind back to me. I've met some great people and I'm just happy that it's become like a second home to me."

Higgins did enjoy the culture he was part of trying to build with the next generation at East Perth before he left at the end of 2013, but the alignment with the West Coast Eagles was always going to put a ceiling on how far they could take it.

There's every chance Higgins would never have become the outstanding dominant and consistent ruckman he is today had he stayed at East Perth as well, but it's been more about just performance and opportunities that has made him feel so at home with South Fremantle.

"When I was at East Perth, I sort of grew up from 18 and 19 playing with Freddie Clutterbuck, Kyle Anderson, Steven Payne and we built a culture on the back of guys like Michael Swan, Craig Glancy and Craig Wulff," Higgins said.

"So we built that culture up, but then going to a new club at the time Hase was the coach and he sort of said to me that they hadn’t played finals for a few years and were looking to do a bit of a rebuild.

"There were a lot of blokes there around my age like Ryan Cook and over the next three or four years we all built up relationships, and it became a really strong group. We all have a really strong bond now because of that. It was a pleasant surprise how well it's gone coming to South, but it's sort of what I was expecting as well."

Higgins remains right at the top of the game in 2019 as well as the standout ruckman in the competition. He is the type of ruckman that seems to thrive on the more responsibility he's given and he just ends up outworking his opponents through attrition by the end of most afternoons.

He might be giving up size and athleticism on most occasions, but through sheer will and physicality, he just finds a way to be the best ruckman in most games he takes part in and is a massive factor in any success that comes South Fremantle's way.

"I think as I get older I get a bit more wise and I understand my game and my role within the game a lot better," Higgins said.

"I don’t try to do anything outside that. I know what I'm good at and I know my strengths, goal kicking's obviously not one of them.

"I just try to play to my strengths and if that's not working, I'll try to disrupt the opposition in anything they are strong at, I 'll try to take that away from them. You see things once you get older that you've seen 60 other times in a game and you know what to do in that situation, that's what it comes down to really."

Having a milestone game in Mandurah on Saturday isn’t quite ideal, but you can't plan these things and Higgins is hopefully looking forward to it being a memorable occasion.

"I think mum will come down, mum and dad normally come to every game and it's one of the boys birthdays this weekend," he said.

"Scooter celebrates his birthday so we might have a few beers down there after the game, we'll just see how we go."

Work life and personal life is also going well for Higgins away from football, including recently getting engaged to his partner, Amy.

"Being engaged hasn’t changed a lot except I'm just expected to pay for a fancy ring next year," Higgins said.

"But it's all good, I propose earlier in the year to my beautiful girlfriend Amy and we've just had a little trip away to Bali together which is nice and it's all going well. You've got to be happy with the way life's going, not much being any other way."