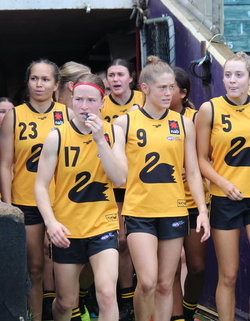 Western Australia’s AFLW U18s recorded a convincing 47-point win against Queensland in the opening game of the AFLW U18 Championships at Subiaco Oval on Friday, June 14.

WA recorded the first major with Mikayla Morrison snapping a great goal on the run from a tight angle in the forward pocket.

A late free kick to Queensland saw Lily Tarlington score a behind after the quarter-time siren to reduce the margin to seven points.

WA came out firing in the second quarter with four unanswered goals, including one to Bianca Webb and three to Roxanne Roux, who showcased her strong overhead marking and versatility when the ball hit the ground to be named WA’s best player.

WA added another goal through Lily Bird in the third term and held Queensland goalless for the remainder of the game with excellent pressure around the contest.

Nyra Anderson capped off the win with a goal after the final siren.