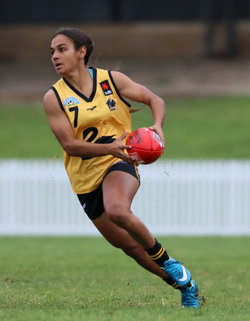 Western Australia will embark on another NAB AFLW Under 18 Championships full of confidence this week ahead of an opening round clash with Queensland at Subiaco Oval today.

The Championships see the best female players from around the country takes centre stage, with many girls looking to impress before the AFLW Draft later in the year.

West Coast listed player Mikayla Bowen will captain the squad as the young midfielder continues her progression towards becoming an AFLW player.

East Fremantle forward Roxanne Roux looks a footballer to watch over the tournament, with the 17-year-old dominating at WAFLW level over the past month.

Emma O’Driscoll, sister of AFL U18s player Nathan, will begin at full-back for the black swans, while Mim Strom will lead the ruck department.

McDonald is looking forward to the opportunity to coach WA’s elite talent, with squad depth a key to success at the Championships.

“The players are really looking forward to the challenge this weekend against Queensland,” McDonald said.

“We have a very well-balanced side with plenty of experience at both this level and at WAFLW.”

“Queensland will provide a really stern test for our girls; we expect their physical approach and hunt for the ball to be their biggest asset.”

WA enters the tournament with 20 players eligible for the AFLW Draft, with 14 having played in the Under 18s in 2018.

Female Talent Manager Clint Degebrodt believes the current program has put the playing group in a great position to succeed over the coming month.

“This program has produced the most talented, physical and readymade athletes for the Championships,” he said.

“The selection process was extremely difficult and that is a credit to the talent the state has at its disposal.”