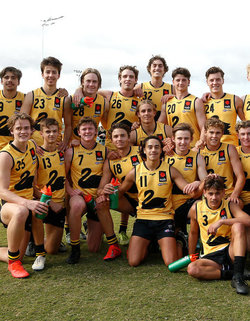 Western Australia have started their NAB AFL U18s Championships in fine style with a 17-point victory over Vic Metro on Saturday.

WA got off to a fast start with Elijah Taylor kicking the opening goal of the game after taking a strong contested mark inside 50. Josh Worrell responded for the visitors with a magnificent set shot. Harrison Jones kicked another goal for the Victorians, before Jai Jackson duly converted another goal for the Sandgropers.

Liam Henry got the Sandgropers off to a brilliant start after he outmarked his opponent before drilling through his first goal of the morning. Ryan Bennell stole the ball off Vic Metro when they were rebounding and nailed another goal for WA. Matt Rowell kicked a steadier for the visitors, and moments later Josh Worrell booted his second goal to reduce the margin to just four points.

The third quarter proved to be WA’s best quarter with Ben Johnson (twice), Trent Rivers, Liam Henry and Tyrone Thorne hitting the scoreboard. Charlie Dean kicked a late goal for the Victorians to keep them within 29 points.

In the final quarter, Elijah Taylor produced a moment of magic when he cleanly picked up the ball, shrugged off a tackle and snapped through a goal. Moments later, Thorne converted his second goal. Worrell (twice), and Josh Honey hit the scoreboard for the visitors to bring the margin back to just 17 points. Henry kicked one back for the home team, and moments later Trent Bianco scored another goal for the visitors.

Next week, WA host South Australia at Optus Stadium as the curtain-raiser for the Fremantle-Port Adelaide AFL clash.

FIXTURES
Round 2 South Australia at Optus Stadium at 11:00am
Round 3 Allies at Alberton Oval at 10:30am
Round 5 Vic Country at Marvel Stadium at 2:10pm