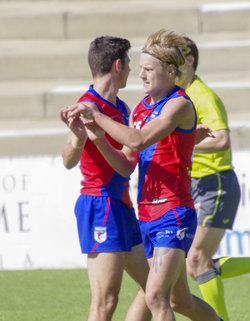 Round 8 of the WAFL colts competition began on Friday evening at Mandurah's David Grays Arena with Peel Thunder proving too strong for reigning premiers Subiaco, winning 9.8 (62) to 5.7 (37).

There was then one lone fixture on Saturday at Lathlain's Mineral Resources Park and that saw Swan Districts continue its undefeated start to the 2019 season, beating Perth 15.15 (105) to 6.4 (40).

Following eight rounds of the 2019 colts season, it's Swan Districts still out on top as the lone undefeated team having won all seven of its matches to date.

Peel Thunder remains clear in second position with a 6-1 record while West Perth moved clear in third spot with their win on WA Day with a 5-3 record.

Round 8 in the WAFL Colts competition got underway in Mandurah on Friday night and it saw Peel Thunder come away with a 25-point victory over Subiaco.

The game took place under lights at David Grays Arena in a battle between a Subiaco team who won last year's colts premiership and a Peel Thunder side who reached the preliminary final.

Peel came out and started strongly kicking the only two goals of the opening quarter but Subiaco hit back in second term to see the Thunder only clinging to a three-point advantage at the main break.

Subiaco then didn’t manage a score of any kind in the third quarter while Peel kicked 1.5 to lead by 14 points at three quarter-time.

The win improves the Thunder to a 6-1 record on the season to remain solid in second position on the ladder while the Lions are 1-6 in last place in their premiership defence.

Swan Districts came into the game starting on Saturday morning as part of the WA Day long weekend having won its opening six games of the season, and then started strongly against Perth kicking four goals to two in the opening quarter.

Swans then added another four goals to two in the second term and that saw the Black Ducks take a 28-point lead into the half-time break.

The win improves Swans to a perfect 7-0 record for the colts season while the Demons are 3-4 in sixth position.

Ben Taylor and Bodhi Nordahl kicked two goals each for Swans as well.

Kade Wallrodt finished the game with 26 possessions, nine inside-50 entries, six marks and five tackles as well for Swans.

With South Fremantle coming into the game having won just once so far this season and East Fremantle having two wins to its name, it was a big game as well to start derby day at Shark Park.

East Fremantle then started the game strongly with the only two goals of the opening term.

Despite having plenty more scoring shots, however, the Sharks would only kick one more goal for the rest of the contest.

South Fremantle worked its way on top during the third quarter kicking three goals to just four behinds from East Fremantle to see the Bulldogs assume a four-point half-time advantage.

The Bulldogs then kicked another three goals in the third quarter to just one from the Sharks and that saw them extend their three quarter-time advantage to 15 points.

South Fremantle kicked a goal in the last quarter with East Fremantle managing only five behinds which saw the Bulldogs claim the 7.8 (50) to 3.15 (33) victory.

Dylan Curley kicked all three of East Fremantle's goals for the game from six kicks.

The Perth WA Day Derby in the colts loomed as a massive one for both teams in the context of the season and in the end it was West Perth who proved too strong, beating East Perth by 37 points.

The game took place at Leederville Oval on Monday morning and with the Royals coming into the game with three wins for the season after a good performance against South Fremantle, and the Falcons on four wins following a narrow loss to Peel, there was plenty on the line.

It was a tight opening to the contest as well with two goals apiece in the opening quarter and then East Perth kicked two goals to one in the second term to head into half-time with a narrow two-point advantage.

West Perth did begin to pull away in the third quarter with four goals to two but the game was still up for grabs with the Falcons holding a lead of 13 points.

The win improves West Perth to a 5-3 record on the season to be two games clear in third position while East Perth sits fifth at 3-4, percentage ahead of the sixth placed Perth.

Koopah Todd delivered a best on ground performance for West Perth made up of 25 possessions, six marks and three goals.