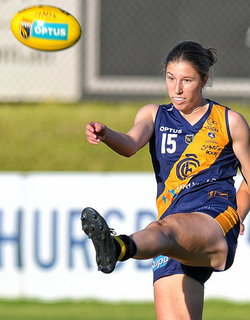 SATURDAY afternoon saw Claremont manage to hold off East Fremantle in a one-point thriller in Round 5 of the WAFL Women's competition while Subiaco kept its impressive form going on Sunday morning.

Round 5 of the 2019 Optus WAFLW Premiership Season saw the two matches spread over two days this WA Day long weekend.

The first contest took place at Claremont Oval on Saturday afternoon with Claremont holding on to beat East Fremantle 4.5 (29) to 4.4 (28) despite going scoreless in the final quarter and the Sharks kicking three goals.

The second game of Round 5 in the WAFLW competition took place on Sunday morning at Mandurah's David Grays Arena with a big win for Subiaco, defeating Peel Thunder 10.10 (70) to 2.7 (19).

The Round 5 WAFLW victories for Claremont and Subiaco see them move clear as the top two teams in the competition with all five sides having now played four matches across those first four rounds.

Both the Lions and Tigers now hold 3-1 records after four matches with East Fremantle and Swan Districts just behind with 2-2 records, and then Peel Thunder remains winless following four matches.

Round 6 in the WAFLW will now take place in two weeks' time with Swan Districts playing Peel Thunder on Saturday June 15 at Bassendean's Steel Blue Oval while Subiaco takes on Claremont on Sunday June 16 at Leederville Oval.

Claremont had a tough start to its 2019 season but the Tigers made it three consecutive wins when they held off the late charge from East Fremantle at Claremont Oval.

Claremont came into the clash with East Fremantle at Claremont Oval on Saturday afternoon on the back of tight wins against Peel Thunder and Subiaco following a loss to Swan Districts and the bye in the opening round of the season.

East Fremantle, meanwhile, won the premiership at league level last season in the WA Women's Football League and started 2019 in the WAFLW competition beating Peel Thunder before a loss to East Fremantle, a huge win over Swan Districts and then a bye in Round 4.

Claremont got the better of the opening with the only three scoring shots of the first quarter and kicked 1.2 from those to lead by eight points at quarter-time.

The Tigers remained in control of the contest in the second term with another four scoring shots to one, but they couldn’t quite put enough of a score on board. They kicked 1.3 from those four shots while the Sharks kicked a goal to limit Claremont's lead to 11 points at the long break.

Claremont's control of the clash continued in the third quarter as well with the Tigers kicking two goals to one behind from East Fremantle to see the Tigers appear to have a match-winning 22-point advantage by three quarter-time.

But it was then all the Sharks in the last quarter as they kicked three goals and the Tigers went scoreless. However, Claremont was able to just hold on for the 4.5 (29) to 4.4 (28) victory.

Emily Bonser's inspirational return from consecutive knee reconstructions continues for Claremont with the Tigers' vice-captain kicking a goal in the win on Saturday along with Chloe Metcalf, Leigha Erceg and Brooke Whyte.

Erceg, Kate Orme, Brooke Hongell, Jasmin Stewart and Bonser were all among Claremont's best players in the win.

Subiaco continued its impressive start to the inaugural WAFLW season with a strong 51-point victory on the road to Peel Thunder on Sunday morning.

Peel was playing its first game of the season on home turf at Mandurah's David Grays Arena on Sunday with the game taking place in the morning ahead of the full day of action with the men's colts, reserves and league action also between the Thunder and Subiaco.

Subiaco came into the game fresh off its first loss of the season at the hands of Claremont on the back of starting the WAFLW campaign with wins against Swan Districts and East Fremantle.

Peel, meanwhile, had played its opening three games all away from Mandurah and suffered defeats at the hands of East Fremantle by 37 points, Claremont by three points and Swan Districts by 46 points.

The Thunder were at David Grays Arena on Sunday morning for their first home game in the WAFLW competition but the Lions got the better of the opening first quarter with three goals to one to head into quarter-time leading by 10 points.

It was another three goals from the Lions in the second term while the Thunder managed just the three behinds and that saw Subiaco lead by 27 points at the half-time interval.

Peel did manage another goal in the third quarter but Subiaco extended its advantage with two more goals of its own to hold a 33-point advantage by three quarter-time.

Tarnee Tester was the star for Subiaco kicking six goals in the best individual haul of the WAFLW season to date.

Caitlin Walker and Sara Lewis were also among the standout performances on the day for Subiaco.

Kate Bartlett and Lauren Quaife were the goal scorers for Peel.