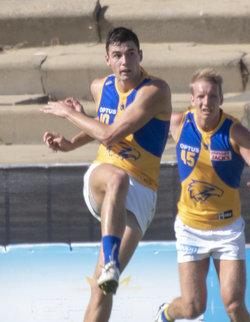 THE WAFL resumes with an early start to Round 6 this Thursday night fresh off Sunday's KIA WAFL State Game and it all begins with the first clash between East Perth and the West Coast Eagles leading into the four games on Saturday afternoon.

The WAFL is fresh off the general bye for the KIA WAFL State Game that took place on Sunday at Optus Stadium with the SANFL managing to come from 22 points down in the second quarter to beat Western Australia by seven points in a tremendous contest.

Usual hostilities now resume in Round 6 of the 2019 WAFL season and it all gets underway on Thursday night at Leederville Oval in the first ever game between East Perth and the West Coast Eagles.

It begins at 7.10pm and will be available on a livestream at www.wafl.com.au and at the WAFL Facebook page.

The rest of Round 6 in the WAFL takes place on Saturday afternoon with the televised match on 7mate featuring the fourth placed Claremont against the fifth placed Peel Thunder at Claremont Oval.

Subiaco is also trying to remain undefeated since losing the 2017 Grand Final, attempting to win a 26th consecutive match against a South Fremantle team who they have played in each of the past three finals series. They meet on Saturday at Leederville Oval.

The last game of the round takes place at Bassendean's Steel Blue Oval between the one-win Swan Districts and winless East Fremantle.

Starting on Thursday night, Leederville Oval hosts the first ever meeting between the Royals and West Coast on the back of East Perth's partnership with the Eagles that started back in 2013, became official in 2014 and remained up until the end of last year.

East Perth has returned to being a standalone club in 2019 and the result has been just the one win in its opening five matches including a last up 77-point loss to Peel Thunder in Mandurah leading into the State Game break.

West Coast is fielding its own team in the WAFL for the first ever time this year with the Eagles winning two of their opening four matches before a hefty 59-point loss to South Fremantle two weeks ago.

Both teams now come into Thursday's contest with plenty of familiarity about one another while also looking to bounce back from heavy Round 5 defeats.

From the East Perth that struggled against Peel two weeks ago, Kye Willcocks, Aaron Redhead, Matthew Johnson, Mitch Dobson, Tarir Bayok and Jayden Magro have all been added to the extended squad.

And from the West Coast team that lost to South Fremantle, Jarrod Cameron, Kurt Mutimer and Brady Grey come into the line-up along with Joel Kalajzic, Tom Hickey and Alex Coe at the expense of Jarrod Brander and Josh Smith at this stage.

East Perth is the lowest-scoring team in the competition so far this season averaging just 47.2 points a game while conceding 92.2. West Coast have been a little better at 66.8 points for and 85.0 points against.

The Royals are the lowest-scoring team in each quarter apart from the fourth terms while East Perth has conceded the most points in first quarters of the season, giving up 24 goals over five games already.

Claremont comes into the game having won its opening three games of the season but have since lost its past two against the West Coast Eagles and Perth to now need to win on Saturday at home to peel to avoid slipping to a 3-3 record.

Peel, meanwhile, delivered an emphatic performance to beat East Perth by 77 points prior to the State Game break to improve to 3-2 on the season as well.

From the Claremont team that lost to Perth a fortnight ago, Ryan Murphy, Ian Richardson, Jordan Law and Tom Lee are all out of the team.

Harry McCracken, Kaiden Gilbert, CJ Oakley, Jake Anderson, Isaac Barton, Jalen McGee and Eddie Simpson have all been named to the Tigers squad to take on the Thunder.

Perth will host West Perth at Lathlain's Mineral Resources Park also on Saturday with the Demons looking to win a sixth straight game and to stop a horror recent run against the Falcons.

West Perth might be struggling to start the 2019 season with its first win coming two weeks ago against East Fremantle, but the Falcons have had the wood over the Demons in remarkable fashion recently.

West Perth has won its past 15 matches against Perth by an average of 43.1 points. The last win for the Demons over the Falcons was in Round 18, 2011 by 29 points and that was at Joondalup Arena.

The Falcons have enjoyed their visits to Lathlain having won the past nine matches there over the Demons. There was then a draw in Round 9, 2008 with West Perth winning four straight at the venue prior to that so the Falcons haven't lost on their last 14 trips to the ground.

But it does appear both teams are on different trajectories in 2019 and a win on Saturday is a chance for Perth to break one of its more unwanted hoodoos.

Then at Leederville Oval, Subiaco puts its 25-game winning streak on the line against a South Fremantle who has restocked over summer and started 2019 impressively winning four of its opening five matches.

With Subiaco coming into the game having won all five its matches in 2019 and having still not lost since the 2017 Grand Final and then South Fremantle coming off playing in the past three preliminary finals, it shapes as a fascinating contest.

The Lions have won their past five games over the Bulldogs, and 11 of the past 12 with South Fremantle's last win against Subiaco coming in Round 1, 2017 with an impressive 39-point win to open the season at Fremantle Community Bank Oval.

But that sort of record is similar to what Subiaco has against all opponents in recent years, but the Bulldogs have good reason to expect to take it right up to the Lions given the way they've started the season.

Subiaco comes into the game with a perfect 5-0 record and is coming off a hard fought 18-point win against Swan Districts where they had to kick the only five goals of the last quarter to stretch their winning run to 25.

South Fremantle won big two weeks ago beating West Coast by 59 points on the back of a 77-point thumping of East Fremantle. The Bulldogs' only loss was by three points to Perth in Round 2 so they could easily be 5-0 like Subiaco coming into Saturday's clash at Leederville Oval.

From the Subiaco team that beat Swan Districts a fortnight ago, Jacob Miller, Drew Rohde, Harry Marsh and Ryan Borchet come into the line-up while Kaidyn Fullgrabe goes out.

Zac De San Miguel and Caleb Datson also come into the South Fremantle squad with nobody out at this stage.

The last game of the round then takes place at Steel Blue Oval with Swan Districts hosting East Fremantle.

Swans might have only won one game in the first five rounds, but have been decidedly more competitive than that suggests including last up against Subiaco.

Swan Districts were 16 points up against three quarter-time against the Lions before being overrun but it was another performance with a lot to like similar to narrow losses to South Fremantle, East Perth and Perth.

Swans will now hope to get their second win on the board against the struggling Sharks who are winless this season and have lost their past 15 games dating back to last year.

There will be added interest too with reigning East Fremantle fairest and best winner George Hampson playing for Swan Districts against the Sharks for the first time since changing clubs over summer.

He has started life at Swan Districts in tremendous form as well and was part of the WAFL State Game on Sunday against the SANFL in reward for his performances.

He won't be the only player going up against his old side with former Swans wingman Blaine Boekhorst playing for the Sharks against the Black Ducks for the first time.

From the Swan Districts team that lost to Subiaco a fortnight ago, co-captain David Ellard returns to the line-up with Mitchell Bain, Patrick Italiano and Dylan Smith all added to the squad.

Jiah Reidy is the only player to go out at this stage.

And at East Fremantle, captain Jonathon Griffin is back to carry the ruck along with Lachlan Bailey, Kyle Baskerville, Chris Scott, Zac Jackson and Corey Robinson added to the squad.

Corey Holmes, Josef Hebiton and Dillon O'Reilly are out for the Sharks.