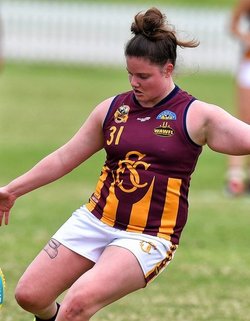 THE second round of inaugural Optus WAFL Women's Premiership Season took place on Sunday afternoon with victories for Subiaco and Swan Districts on home turf.

The inaugural season of the WAFLW got underway the previous Sunday with East Fremantle defeating Peel Thunder, and Subiaco getting the better of Swan Districts.

It was then Round 2 of the debut season on Sunday afternoon and the action got underway at Leederville Oval with Subiaco beating East Fremantle 7.4 (46) to 5.5 (35).

The second match of the round took place at Bassendean's Steel Blue Oval and that saw Swan Districts defeat Claremont 9.9 (63) to 4.3 (27).

The results mean that after two rounds of the 2019 WAFLW season, Subiaco is out on top of the table with a perfect 2-0 record after winning their opening two matches.

East Fremantle and Swan Districts are both 1-1 having played the first two rounds as well while Claremont and Peel Thunder have lost their only appearances.

Subiaco hosted East Fremantle in a Grand Final rematch from last year and on this occasion it was the Lions prevailing by 11 points over the Sharks.

The two teams played off in the league Grand Final of the WA Women's Football League in 2018 with East Fremantle prevailing on that occasion to claim the WAWFL premiership.

On the back of that final season of league action in the WAWFL, the WAFL Women's competition was formed with the five clubs taking part in the inaugural season.

The opening round saw victories for both Subiaco and East Fremantle against Swan Districts and Peel Thunder respectively, setting up a tantalising match up between the Lions and Sharks at Leederville Oval on Sunday afternoon in Round 2.

East Fremantle kicked the only goal of the opening quarter but Subiaco then produced an impressive second term with four goals to one to head into half-time leading by 12 points.

The Sharks did fire back in the third stanza kicking three goals to two and the game was up for grabs at three quarter-time with Subiaco only leading by three points.

The Lions were able to hold the Sharks scoreless in the last term while kicking the only goal themselves to remain undefeated this season with the 7.4 (46) to 5.5 (35) victory.

Melissa Lim, Lara Filocamo and Rohde were named among the standout performers for the Lions.

Sharon Wong, Roux, Julie-Anne Norrish, Philipa Seth, Versaci and Ashleigh Gomes were all among the best players on the day for the Sharks.

Swan Districts was back home for its second straight week to open the WAFLW season and on Sunday it was Claremont making its first appearance in the new competition at Bassendean's Steel Blue Oval.

Swan Districts had started the new WAFLW competition with a loss to Subiaco the previous Sunday but having been one of the powerhouses throughout the WA Women's Football League, the black-and-whites hit back with an impressive showing on Sunday.

The Round 2 WAFLW action took place at Steel Blue Oval and Swan Districts came away with the 9.9 (63) to 4.3 (27) victory against Claremont on home soil.

On the back of the loss to Subiaco the previous Sunday, Swans opened the game impressively this Sunday back in front of their home fans.

Swan Districts held Claremont scoreless in the opening quarter while having five shots themselves for two goals to lead by 15 points by quarter-time.

Claremont fired back strongly in the second quarter and kicked four goals to two from Swan Districts to cut the half-time advantage of the Black Ducks to just the two points.

Swans once again were able to keep the Tigers scoreless in the third quarter while kicking three goals five behinds themselves. That saw the home team lead by 25 points heading into the final term.

Claremont only managed the two behinds in the last quarter and Swan Districts kicked another two goals to end up winning by the game by 36 points to open their account for the WAFLW season in emphatic fashion.

Aimee Ralph, Emma O'Driscoll, Taylor Pescud, Lauren Osborne and Mikayla Hyde were all among the best players for Swans in the victory.

Bella Zadnik and Sophie McDonald were particularly impressive for Claremont.