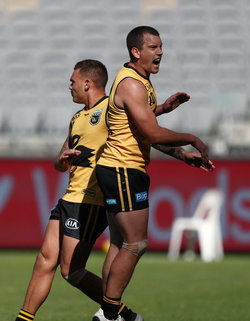 THE KIA WAFL State Team has just fallen short of its piece of history with the SANFL producing a tremendous second half kicking eight of the last 12 goals to win the 2019 State Game by seven points at Optus Stadium.

It proved a tremendous showcase of State football between the two leading competitions in the country with South Australia managing to bring an end to Western Australia's string of winning six consecutive State matches despite being 22 points down in the first half.

On the back of having won the past six State Games it had contested including last year's drought breaking result over the SANFL at Adelaide Oval, the WAFL started strongly at Optus Stadium on Sunday.

WA kicked the game's first two goals and then with the first three of the second term, were up by 21 points. That grew to 22 points when the dynamic Michael Bennell kicked his third, but South Australia wouldn’t go away.

The SANFL had closed the gap to four points by half-time and then after WA again led by 11 points early in the second half, South Australia took control.

The Croweaters kicked four consecutive goals to claim their first lead and were up by as much as 20 points late in the third term. WA did get back within eight points late in the game but it wasn’t to be with South Australia winning 16.4 (100) to 13.15 (93).

Another four-time Subiaco premiership star, Kyal Horsley was unlucky not to back up last year's Simpson Medal with a State Game one having delivered 32 possessions, eight inside-50 entries and two goals as WA captain.

Aidan Tropiano, who won a Sandover Medal playing in the WAFL for Perth, was tremendous for the SANFL with 28 possessions and 11 tackles while John Noble finished with 24 disposals, Kaine Stevens 22, Jarred Allmond 20, Danyle Pearce 20, Will Snelling 19 and Matthew Rose 18.

Jordan Foote was terrific with 24 possessions and two goals while Dom Barry had two goals to go with 23 disposals, six marks and six inside-50 entries.

The KIA WAFL State Team made the perfect start with the first goal of the game thanks to Gerald Ugle before Michael Bennell came on and showed why he's one of the most exciting players in the country not in the AFL, giving WA the opening two goals.

The SANFL did steady with the next two thanks to Jonathon Beech and Dom Barry and then it was goal for goal the rest of the quarter with two more goals for WA to Ben Sokol and Haiden Schloithe, and goals to South Australia from Justin Hoskin and Barry.

The WAFL was up by three points at the first change before just five minutes into the second quarter goals from Schloithe, Sokol and Bennell, the lead for the hosts was out to 21 points and they had all the momentum.

When Bennell turned on the magic again soon after WA was 22 points to the good before the Croweaters stemmed the tide and then kicked the last three goals of the half to only be four points down at the main break.

The WAFL went back up by 11 points to start the second half with a goal to Josh Deluca and there was no sign of what was to come.

But the SANFL turned on some blistering football the rest of the third term including three quick goals in four minutes to Kaine Stevens, Troy Menzel and Lewis Hender.

Their lead then grew to 14 points when Beech kicked his fourth. WA did get one back through Kyal Horsley, but South Australia responded with two more before three quarter-time to lead by 18 points at the last break.

Sokol had missed a sitter after the three quarter-time siren, but he made up for it with his third goal to start the last term to bring the WAFL back within 12 points.

South Australia got the immediate response, though, courtesy of Will Snelling but a fourth goal to Sokol at the 10-minute mark kept the WAFL in touch.

A brilliant piece of play to gain possession from Anthony Wilson set up what appeared to be the match-winner for the SANFL from Hender, but the WAFL kept coming.

Experienced pair Schloithe and Hampson did miss shots on goal but Horsley kicked his second to keep the home team within touch, eight points down at the 22-minute mark.

The WAFL had another chance but Horsley's short pass inside-50 was intercepted and time expired with the SANFL ending up winning by seven points.