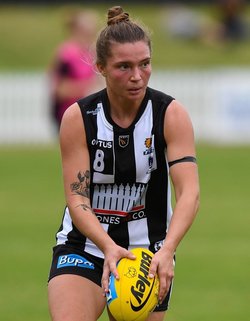 ROUND 2 of the inaugural Optus WAFLW Premiership Season takes place this Sunday afternoon with a Grand Final rematch between Subiaco and East Fremantle with Swan Districts also taking on Claremont.

The new WAFL Women's competition for 2019 started with a bang last Sunday with wins for East Fremantle over Peel Thunder, and for Subiaco against Swan Districts.

It's the first season of the ground breaking competition featuring five clubs and now the action continues with the two games this Sunday.

It gets underway at Leederville Oval from 2pm with a Grand Final rematch from the WA Women's Football League competition last year as Subiaco takes on East Fremantle. The game will be livestreamed at www.wafl.com.au and the WAFL Facebook page.

The other Round 2 contest will feature Swan Districts against Claremont at Steel Blue Oval from 2.45pm.

Round 2 in the WAFLW sees the first meeting since last year's Grand Final in the WA Women's Football League between Subiaco and East Fremantle.

East Fremantle won that game last year to claim the premiership with the Sharks then starting off the 2019 season in WAFLW impressively beating Peel Thunder 8.4 (52) to 2.3 (15).

That sets the stage for the two winners from Round 1 and the Grand Finalists to meet in a fascinating contest at Leederville Oval on Sunday afternoon.

The second game of Round 2 will then take place at Steel Blue Oval with Swan Districts hosting Claremont.

Swans are coming off their Round 1 loss at home to Subiaco by 29 points while Claremont had the opening round bye so the Tigers will be making their WAFLW debut.

The two teams will be competing for the Dhara Kerr Memorial Club which is played annually between the two clubs. The cup is currently held by Swan Districts who beat Claremont for that honour in Round 4 of the 2017 WAWFL season.

Dhara Kerr was born in Warrnambool, Victoria on August 28, 1971 and died in Perth on October 13, 1995. She was the youngest of four children and moved to Perth in 1992. In the same year, she started playing football for Innaloo.

For her club, Dhara won fairest and best awards from 1992 to 1995 and captained her club to their first premiership in 1995. In the grand finals that Dhara played in, she shared the best on ground award with Sharon Woods in 1993 and won the award outright in both 1994 and 1995.

Dhara also won the WA Women’s Football League fairest and best award from 1992 to 1994. In 1994, she was selected as deputy vice-captain for the league’s first state team that travelled to Adelaide and played against South Australia.

In that game she was selected as best on ground for WA.

Following Dhara’s death, the two teams decided that the first time that they meet each season be dedicated to her memory with the Dhara Kerr Memorial Cup.