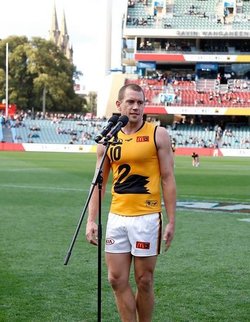 NOT only has Kyal Horsley enjoyed tremendous success at Subiaco since returning from the Gold Coast Suns, but he's been a key part of the WAFL's State Game dominance which he hopes continues against the SANFL at Optus Stadium on Sunday.

Horsley returned to captain Subiaco in 2014 on the back of spending the previous two years in the AFL system at the Gold Coast Suns where he did play 13 games despite rupturing his ACL and requiring a knee reconstruction.

But his return to Subiaco where he already was a premiership player from 2008 has been remarkable starting with that 2014 season where he captained the Lions to the flag.

Subiaco went back-to-back in 2015 with Horsley spearheading their dominance before the Lions continued to be the benchmark during the next two home-and-away seasons before losing to Peel Thunder in the 2016 and 2017 Grand Finals.

The Lions then went through undefeated in 2018 with Horsley leading the charge with Subiaco winning the premiership as he finished up winning the Simpson Medal as best afield on top of being premiership captain and the fairest and best for the Lions.

That meant that as he stood down as Subiaco captain heading into 2019, he was a four-time Subiaco premiership player with three of those as captain on top of being a triple fairest and best winner, Simpson Medallist and a four-time state representative including being captain.

It's hard to picture a more decorated player than Horsley as he now prepares to play for the WAFL State Team for a fifth time as he approaches the career 200-game milestone at Subiaco.

He might not be captain at Subiaco in 2019 but remains the standout player in the competition with a blistering start for the Lions who remain undefeated since that 2017 Grand Final loss at the hands of the Thunder.

That makes Horsley a lock for selection providing his fit to take on South Australia at Optus Stadium on Sunday and he is excited for the chance to play in another State Game, and especially to do it on Optus Stadium where his memories are fresh from las year's Grand Final triumph over West Perth.

"Everyone's really excited and nervous at the same time. But to get the chance to play at Optus Stadium, which is the No. 1 ground in Australia if not the world at the moment, is obviously a huge privilege," Horsley told 91.3 SportFM.

"Then to take on South Australia who have such a strong competition like us is a great challenge. We have a lot of pride in our competition and we believe it is at State level and obviously they believe theirs is the best.

"There's a lot of excitement coming into the game and nervous energy at the moment, but the boys are really buying into. Broady has really driven that and he has set a vision and a purpose for everyone, and everyone buys into that. Hopefully we can replicate the success of the last few years."

Horsley is no stranger to the State Game environment as he prepares to pull on the Black Swans jumper for the fifth time in his career, but what continues to be the thing he enjoys the most about the experience is the chance to bond with the other elite WAFL players.

"The best part about it is that you get the chance to talk to a whole different group of people, and guys that you usually play against on the weekend. You actually get to learn a bit about their life," he said.

"Everyone can get build up a bit of a rivalry when you play each other on the field but when you meet them off it, everyone in footy clubs are generally really good people. It's been good to spend time with them and that's something only a thing like the State Game provides the chance for you to do."

Horsley has been a key figure in much of the success the WAFL State Team has enjoyed in recent years.

The WA teams have won the past six State matches including beating the SANFL representative sides both in Perth and Adelaide, but he knows the pride the Croweaters have in their competition.

Horsley is fully aware it's going to take the best performance from the WAFL on Sunday to come away with a seventh consecutive State Game win, but he hopes they have some in-built advantage over the Josh Carr-coached SANFL team.

"We played them last year and they jumped us in the first quarter and had us on the ropes, but fortunately enough we stuck to what we know, and how we like to play and were able to wear them down," Horsley said.

"One thing we do know is that they play different rules to us so they have to adjust to play the way we play when they come over here, so that might be a bit of an advantage to us.

"But generally when you think something is to your advantage, it can be to your weakness or no advantage at all. Hopefully with the rules different to ours and having to adjust to our positional rules can lead to us getting an edge over them that way any way."