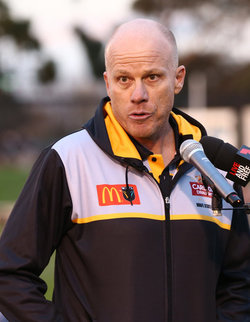 THE WAFL has proven the dominant figure in State Games for the past six years and West Australian coach Michael Broadbridge hopes the KIA WAFL State Team can create further history on Sunday against the SANFL at Optus Stadium.

The KIA WAFL State Team has won their past six State matches and along that six-game winning streak there has been historic road victories against the VFL in Melbourne and the SANFL in Adelaide.

It's back home this Sunday for the WA team as they host the SANFL at Optus Stadium with the game held as a curtain-raiser to the AFL clash between Fremantle and Richmond later that afternoon.

Broadbridge will once again be coach of the KIA WAFL State Team for the clash with the SANFL on Sunday and he's fully aware of what further history is there possibly to be created.

With WA having already won six straight matches and created history along the way while cementing the WAFL as the premier State league competition in the country, Broadbridge is excited for plenty of reasons heading into Sunday including the chance of a seventh straight victory.

"WA has never won seven consecutive State Games, we've actually won six now and we're joint with an era back from 1926/27 when it commenced back in the history of State footy," Broadbridge told 91.3 SportFM.

"I also don't believe that any other state has ever won seven in-a-row either although I've struggled to find someone to confirm that for me. I believe there is a massive carrot at the end of this game for us to become the most winning State football team in the history of Australian football.

""I think that's a significant carrot and milestone along with the fact that winning any type of game of football gives you a great deal of joy.

"I'm hoping that the crowd gets there a bit earlier on Sunday and can really provide a great atmosphere for both teams, and for Western Australia and to barrack for a State team that they might have not done for a very long time."

Broadbridge is also glad the game on Sunday will be played at Optus Stadium giving the majority of the players from both teams their first opportunity, and potentially only in some cases, to play at the venue.

And for the WAFL players, after the last two years winning away from home in Melbourne and Adelaide, he is happy for them that they get to play on home soil while playing for their state.

"It's fantastic and it's a great honour to play a curtain-raiser on a fantastic Optus Stadium but it's also as important, if not more so, for the chance for the players to play in front of their loved ones – their friends, their family and the people that have followed their whole football career," he said.

"They get the chance to represent the state in front of them and that's always something special.

"The preparations are very similar, obviously there's no travel involved this time which takes away a couple of days late in the preparation. But the rest of the program has been fairly similar and we're sticking with what we know works."

One hiccup in preparation for Broadbridge and his coaching staff was perhaps the first player picked, ruckman Brock Higgins ruling himself unavailable.

The South Fremantle big man has been the clear dominant ruckman in the competition so far this year, named to the WAFL Team of the Week on all five occasions and if he made himself available, he would have been a lock to lead the ruck for WA on Sunday.

But with the heavy workload he is carrying at the Bulldogs on top of some soreness he's been playing through and concern over the hardness of the Optus Stadium surface all meant that he withdrew from the squad.

Broadbridge is confident that between Swan Districts pair Corey Gault and Tony Notte, and Subiaco's Lachlan Delahunty that they can share the ruck duties.

"I think it was more the fact that Brock had been carrying a niggle and he just wanted to give it a chance to rest so he could get through the rest of the season," Broadbridge said.

"He was fantastic for us last year in the State Game, he was a lion out there and he would have been again this year too so we're definitely going to miss him.

"But it creates an opportunity for Corey Gault and Lachie Delahunty, and even Tony Notte to share the ruck work through the course of the game. They are all quality players so I'm sure we'll have some very good replacements there for Brock."

One late addition to the KIA WAFL State Team has been Perth excitement machine Michael Bennell and while he might not be winning a lot of the ball right now, Broadbridge sees him as the exact type of player you need to take into a State Game.

"He's an interesting player. He's obviously very deadly when he gets near the ball but his challenge over his development in the near future will be to get near the ball more often," he said.

"He's a low possession getting player at the moment but those possessions tend to be goals or very close to goals. I believe he is a striker, he can take a great mark and he can do some special things when the ball is near him.

"I believe he loves to tackle as well when the opposition players are around him so he certainly has some threats. When you play these type of games you need players like that with an X-factor who can do things in special situations to help you get over the line."

Broadbridge is set to lead the WAFL into battle for the third straight year as head coach continuing a long commitment for him through State football as a player and then even assistant coach through both State of Origin and State Games.

It's something that means a tremendous amount to him and both to help the players reach a next level in their football and to help coaches be involved at a higher level too whether it's someone with enormous experience like Steve Malaxos or a fresh retiree like Ryan Cook.

"It's been a great thrill, it really has. I'm a very passionate West Australian and I've got a long history of playing State footy and now coaching State footy, and winning those games," Broadbridge said.

"I feel very fortunate to have that history and to see the joy on the faces of the players to get the opportunity to play at this next level and winning those State Games is a huge thrill.

"They were monumental achievement and to see the joy that brought those players and to also be part of some success for the WA football system that really endorse the football over here as being the premier domestic competition in the country is really satisfying from my perspective.

"And equally so is having a team of assistant coaches with me like Garry Moss, Steve Malaxos, Clay McLernon, Ross McQueen, Brad Dodd and Ryan Cook and having their varied levels of experience alongside me. It's something that I really do enjoy."