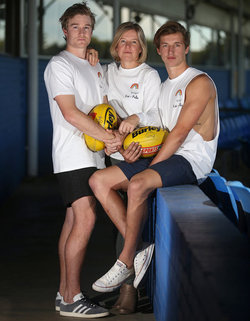 The WAFL Simply Energy Colts will help raise awareness about mental health and suicide prevention when the Kai Eardley Foundation Colts Super Round is played this weekend.

A gold coin donation at each ground will raise funds for the Kai Eardley Foundation, which is named in honour of East Fremantle player Cam Eardley’s younger brother, Kai, who tragically took his own life in 2016.

“Having lost Kai, I will always wonder what I could have done differently, and my only conclusion is that there is little else I could have done in July 2016 when Kai reached crisis point. I wish there had been some early intervention available before he reached that point of no return.”

“We believe a peer-based program available to young men, which helps to erase the tough macho stigma associated with our Australian male culture is an important piece of education that should be available to all men.”

“The WAFL Colts grow football stars of the future but these players can still be vulnerable to mental health stresses. I’ve been that Colts parent wishing for my son’s success, without knowing that I would be travelling a very different path only a few years later.”

“My mission is to create a positive change for the mental health of the youth of today. Suicide is now the biggest killer of men aged between 19 and 45, with 12 men lost to suicide every day.”

“I hope the Kai Eardley Foundation can honor Kai’s life and at the same time create awareness around mental well-being. If we can make a difference, even if it is just for one family, I’ll see it as my job well done.”

Since 2017 the Kai Eardley Foundation, held currently within the Fremantle Foundation, has granted over 160 thousand dollars and helped roll out 110 WA school programs to raise mental health awareness through facilitator group Tomorrow Man.