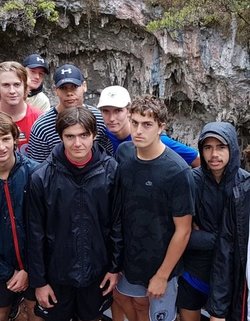 The NAB AFL WA Under 18s Academy have continued their preparations for the National Carnival after attending a second team camp in Margaret River last month.

The state’s top talent were put through a series of team building exercises throughout the week-long adventure, setting up base at Explorus Campsite just outside Karridale.

Activities such as Abseiling Willyabrup Cliffs, exploring Giants Cave and building tents from scratch were just some of the major highlights, with WAFC staff putting in long hours to ensure a successful trip.

WAFC Talent Manager Adam Jones was thrilled with the first edition of the revamped camp, citing the team building aspect as a huge positive heading into the football season.

“The camp was an incredibly successful experience, as it gave the players the perfect platform to bond and form rapport outside their normal football surroundings,” Jones said.

“Many of the challenges were based around team work, with a real emphasis on leadership during the five days.”

“The boys trained well early in the week at Mandurah and took on every activity with 100% commitment and effort.”

“We really look forward to our final camp in South Australia as we look towards June and the beginning of the Under 18s National Championship.”

The AFL has also released its fixture for the mid-year Under 18 Championships, with the League to again run a five-round competition for the five teams, meaning each will play four games and have one bye.

The Sandgropers begin their campaign at home against Vic Metro on Saturday, June 8, before taking on South Australia at Optus Stadium the following week.