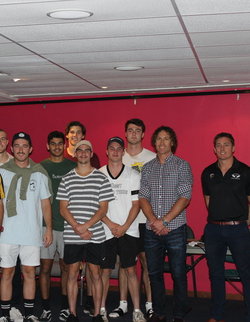 For much of Matt Priddis’ storied career there were doubters, and after missing out on the draft for a third consecutive year many would have given up, but that wasn’t the Priddis way.

The Brownlow medallist had to wait a long time for a chance at his childhood dream, a journey he believes prepared him for the challenges that lay ahead.

The WA Football Commission invited Priddis to speak to players from WA that unfortunately missed out on selection in the 2018 AFL Draft, with the 33-year-old imparting plenty of wisdom and key messages to the group.

“I remember it as clear as day (missing out on his first draft),” Priddis mentioned during his chat to the group at Subiaco Oval this week

“I know exactly what you boys are going through but it does get easier. It will add fuel to the fire.”

“Let it continually motivate you and don’t let go of that.”

The simple but effective commentary related to many in the room, hearing the difficulties that the WAFL champion endured to begin his career.

“I had dreams throughout my State 18’s and WAFL Colts days, but the reality was I probably wasn’t good enough early on,” he said.

“I grew up just wanting to play AFL footy that was my dream, and for the most part you feel like you’re well on your way.”

“But nominating as an 18-year-old, I didn’t speak to any clubs and just did the state combines, and I missed out.”

The 2006 Sandover Medallist was strong in his advice for the days and months to come, maintaining that football is the ultimate team game, a feature that shouldn’t be lost in the disappointment of missing out.

“Basically, throughout my whole footy career I just wanted to prove people wrong. But, the best thing about football is that it’s the ultimate team game, we all have roles to play.”

“Whether you’re tall, small, fast or slow – design your game to suit your strengths. There are plenty of recruiters that are telling you what you can’t do but I tried to focus on the 80% I did well.”

Priddis looks back on the memories of being drafted fondly and believes a shift in mentality enabled him to get the best out of himself for a long period of time.

“That was a real defining moment for me after missing out on four drafts, I got my opportunity,” he said.

“My goal was to get into the AFL, but I stopped thinking about that and instead focused on enjoying my footy.

“You must enjoy your footy, that’s why we play the game we all love.”

WAFC Talent Manager Adam Jones was thrilled to have Priddis present to the young men, believing that many took important messages away with them.

“To have someone of Matt’s calibre speaking and offering advice to these players is terrific, particularly given he followed a similar pathway to many that came to listen,” Jones said.

“Hopefully the boys take away some of the messages from Matt and will implement them throughout the 2019 season and beyond.”