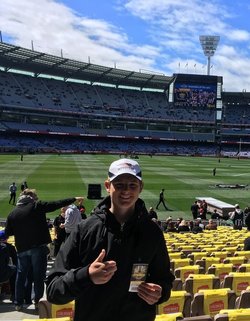 Junior umpire Kynan Davies became the envy of all junior umpires across the nation when he, along with six other junior umpires, was selected by the AFL to officiate the half-time Auskick games at the 2018 AFL Grand Final.

It was a once-in-a-lifetime experience for the 16 year-old Peel football district umpire who got to run out onto the hallowed turf of the MCG in front of a crowd of more than 100,000.

“The atmosphere at the MCG was amazing and I made so many new umpiring friends from different states,” he said.

“My main focus from the time I run at from the race onto the turf was to soak up the experience, have fun and make sure every kid got a kick of the footy.”

After the half-time games Kynan sat amongst the crowd and witnessed the second half of the match unfold.

“I watched the AFL umpires in action during the game and really noticed how calm and in control they were,” he said. 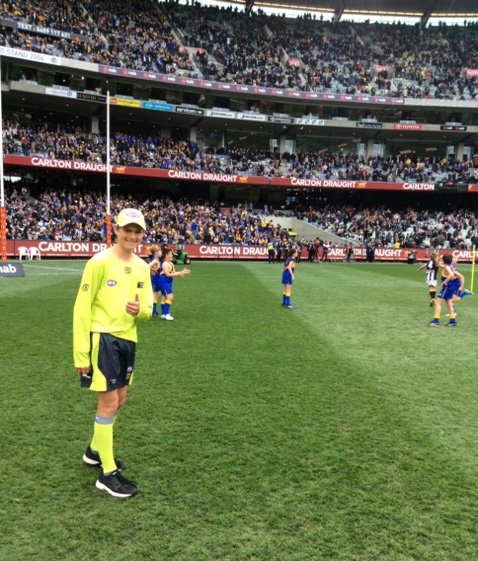 “This is something I will take home with me as I want to learn how to keep calm and not stress out when making big decisions.”

Kynan was also lucky enough to take part in the 2018 AFL Grand Final Parade the day before the big season decider.

“The fans over east are very passionate and turned up in huge numbers to support the two Grand Finalists during the parade. The atmosphere was electric and the entertainment and festivities at the end of the parade were absolutely mind blowing," he said.

"I will never forget this amazing experience and the fact that I was chosen to represent WA umpiring at the 2018 AFL Grand Final.

“I would like to thank the AFL and also my idol Dean Margetts who encouraged me to pursue umpiring and has taught me so much along my journey.”

Next season Kynan will take another big leap in his umpiring journey when he joins the WA umpire leadership program.

“I am really looking forward to being part of the leadership program next season where I will get the opportunity to help strengthen the skills and technique of young emerging umpires and also build their confidence to ensure they perform at their very best on game day,” he said.