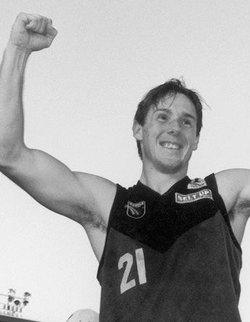 East Perth Football Club has been preparing for its return to a standalone club since deciding earlier this year to finalise its partnership with the West Coast Eagles.

These preparations have included seeking a head coach to lead East Perth Football Club beyond its partnership with the West Coast Eagles, as early as the 2019 season.

In anticipation of the final decision of the WA Football Commission relating to a tenth team in the WAFL competition, East Perth Football Club has announced that 3-time Premiership Captain Jeremy Barnard will coach East Perth for the next three seasons.

After an illustrious 221 game career at the Royals including the 2000, 2001 and 2002 Premierships, a State game, two-time WAFL Team of the Year inclusions (Captain 2003), East Perth Life Membership and induction into the East Perth Hall of Fame in 2010, Jeremy moved to Victoria, continuing to play with Strathmore in the EDFL where he added another two Premierships to his list of playing achievements.

Barnard began coaching in 2008 as Senior Coach at Strathmore, leading the club to a Preliminary Final. Between 2009-11 he held various positions within the coaching structure of VFL clubs Sandringham and Williamstown including development roles, Midfield Coach, Backline Coach and Senior Assistant Coach with continued success. In 2012 Jeremy moved into Development roles, firstly with the Victorian Metro Academy then for the Sandringham Dragons in the TAC Cup.

Over his coaching career to date, Jeremy has completed all the steps to become an AFL Endorsed, Level 3 AFL High Performance Coach and comes to East Perth as a highly credentialed and recommended Head Coach.

'The Club is excited to have secured Jeremy's services.' CEO Dean Turner said. 'Not only does he have a tremendous playing and coaching resumé, but he is East Perth through and through. He will be an important part of our Club as we look to the next chapter in our rich history.'