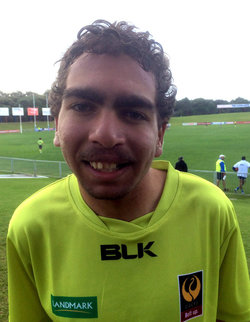 Denzel and two fellow regional boundary umpires were selected for the Grand Final from a 20-strong boundary panel that umpired in Perth in the three-day round robin country championships.

Former WAFL boundary umpire Brendan Farrell, who led the boundary umpire team, recognised Denzel for his talent and said he was most impressed with the 17 year old’s terrific attitude.

“Denzel has an appetite to learn and become an even better boundary umpire. He still has a way to go, but he’s keen and shows promise,” Farrell said.

Had it not been for Denzel feeling seriously unwell several years ago he would likely have never picked up the whistle. Medical examination revealed a surprise to Denzel and his family. He was born with just one kidney.

Denzel said that diagnosis was the catalyst for his shift from playing to umpiring in the Great Northern Football League (GNFL) base around Geraldton and the Mid West region.

“One of my school teachers, former GNFL umpire Murray Stevens, encouraged me to give umpiring a go. I continued umpiring, as I like to keep fit and really enjoy being close to the footy action,” he said.

When he completes school at the end of this year, Denzel is hoping to secure an automotive mechanic apprenticeship in Perth, so he can trial with the WAFL boundary umpire panel.

WAFC Manager of Umpiring Pathways Tim Priest said: “Denzel is a fine lad, quietly spoke and well mannered. It was fabulous to see Denzel back at Landmark this year, following his success in achieving a B Section Grand Final in 2015.

“To go one better and umpire Division 1 was a credit to Denzel, along with his GNFL coaches and the local GNFL competition,” Priest said.

Denzel also represented WA as an indigenous umpire at the AFL Diversity Championships in Townsville in April, following his GNFL Grand Final boundary appointment in 2015.

“Denzel has the key attributes required to be a quality boundary umpire – the ability to make composed calls under pressure and secondly, to provide consistent, ruck contestable high throw ins. He is on the boundary umpiring talent pathway radar for sure,” Priest said.