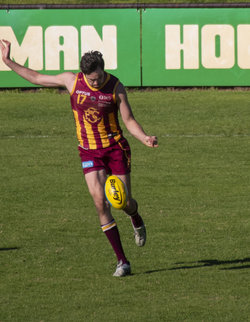 WHILE his teammate Kyal Horsley likely cemented his place as the Sandover Medal's unluckiest player in WAFL history, that shouldn’t diminish the fact that Lachlan Delahunty deserved the honour having likely taken on the position as the competition's best player in 2019.

It was quite the thrilling vote count to determine the winner of the Sandover Medal at Optus Stadium on Monday night as the week builds up to what shapes as a fascinating WAFL Grand Final on Sunday at the same venue between Subiaco and South Fremantle.

The vote count reverted back to a 3-2-1 system and in the end it wasn’t until the very last round of a 20-week home and away season until the winner was determined with three players still eligible entering the last round.

Subiaco legend Kyal Horsley found himself join leader after 10 rounds alongside Claremont's Jye Bolton who has won two of the past three Sandover Medals.

Horsley had then opened up a four-vote lead over another former winner, Claremont's Kane Mitchell after 15 rounds and then with two games remaining in the season, he was three votes in front of teammate Lachlan Delahunty.

Delahunty then received two votes in Subiaco's Round 19 win against West Perth to close the gap to one on Horsley entering the final round, but with Bernie Naylor Medallist Ben Sokol in red hot form, the three votes in Round 20 against East Perth was going to be fascinating.

In the end, Horsley received one vote to go to 27 and then it was Sokol who got the two for another six-goal haul that took him to 16 for the season and Delahunty received the three for his standout performance in the ruck made up of 32 possessions, 15 hit outs, eight inside 50s, six marks and a goal.

That took Delahunty to 28 votes including 11 of a possible 15 over the final five rounds as his dominant season became more and more prolific the longer the campaign went on.

Delahunty produced a dream season where he started out as a centre half-forward sharing his time in the ruck before settling into being the main ruckman in the second half of the season and as a virtual fourth midfielder, racked up some incredible numbers.

There is no question of Delahunty's deservedness as a Sandover Medallist, but it's also impossible to not feel for his teammate Horsley whose only accolade missing in his remarkable Subiaco career remains the Sandover Medal.

Having already finished runner-up in 2011 and 2018, and then coming third in 2014 and 2017 showing his remarkable consistency, it was a fifth top three finish for Horsley as he was once again pipped at the post.

It was another incredible season from the four-time premiership player who celebrated his 200th game with Subiaco during 2019 as he continued to thrive with the freedom of playing without the captaincy.

Horsley averaged 26.9 possessions a game in 2019 and didn’t have a game where he gathered fewer than 20 times and in 18 appearances, was named to the WAFL Team of the Round 10 times.

With his career already full of Subiaco premierships and fairest and best awards on top of a Simpson Medal and state appearances and captaincy, the Sandover Medal is the one thing that eludes him but he has gone ever so close, and over a 201-game career has now polled 235 votes.

While Delahunty did feel for his former captain and inspirational teammate after receiving the Sandover Medal, ultimately nobody can question that he is a deserved winner and that he should be remarkably proud of the season he put together.

"With Kyal, I don’t know what to say to be honest. It's almost embarrassing that he doesn’t have one of these and I would have loved to share this with him, but he's an honour to play with and has been a mentor of mine," Delahunty said.

"But I just have to thank the Subiaco footy club for taking me in almost six years ago starting with Peter Capes (chief executive) and Mark Lawrence (president).

"A gentleman not here tonight but had a huge influence on my football career is a Jarrod Schofield, he really set the foundation for this footy club and I probably wouldn’t have stuck at it without him or achieved what I have with the team or individually. Now Beau is stepping in this year and has done a fantastic job."

Already a Subiaco premiership player in 2014, 2015 and 2018 since crossing from VFL club Frankston, Delahunty had already confirmed himself the best and most versatile big man in the competition.

He racked up 100 games with the Lions during the 2019 season and might very well have turned himself into the best overall player now after an incredible individual season.

Then once he settled into carrying the ruck over the last 10 games as Subiaco tried to find the right replacement for Zac Clarke, he was remarkable putting up 29.9 disposals, 19.9 hit outs and kicking nine goals.

That was recognised by the umpires as he racked up the votes in the second half of the season to now head into Sunday's Grand Final against South Fremantle as a Sandover Medallist.

While Sandover Medal voting sometimes can be questioned, a peek at the leaderboard for 2019 and the umpires deserve to be commended for the fine job they did.

If you have a look at the five players who ended up with 20 votes or more with Delahunty finishing on 28, Horsley 27, Claremont's Kane Mitchell 24, fellow Tiger Jye Bolton 22 and South Fremantle's Haiden Schloithe 20, and few would argue they are the five standout players in the WAFL.

Remarkably four of them are Sandover Medal winners now too and it's still hard to fathom that the one who isn’t has likely had the best career of them all, Horsley.

Going further down the leaderboard and evergreen Perth on-baller Clint Jones received another 19 votes to take his career tally to 176 over 159 games.

Of those 11 players who received 15 votes or more, 10 of them were named to the TABtouch Team of the Year. Banfield was the only to miss out on the final 25 and in the end he likely missed out in favour of Peel teammate Tobe Watson.