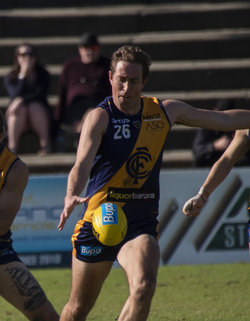 HAVING been ever so close to Claremont's last period of WAFL dominance, Anton Hamp has had to change to being a defender and waited longer than he hoped, but now is desperate to make the most of being in another preliminary final.

Hamp was drafted by the West Coast Eagles and played his early football at Claremont as quite the impressive key forward and it seemed a natural that he would be the long-term replacement for the likes of Tom Lee, Chad Jones and even Beau Maister.

As Hamp was in the formative years of his career, it was quite the tough Claremont team to break into between 2010-2013 as they won four successive minor premierships, played in three straight Grand Finals and won back-to-back flags in 2011 and 2012.

He played four league games in 2011 and another six in 2012 while becoming a reserves premiership player, but that was quite the challenging forward-line to try and break into.

But Hamp managed to cement his spot by 2013 and kicked 34 goals in 20 matches with his career heading in a positive direction.

However, Claremont's dominant period ended in that finals campaign where they lost a second semi-final to West Perth and a preliminary final to East Perth both at Claremont Oval.

At that stage, Hamp could have never imagined it would be six long years until Claremont reached another preliminary final nor that he would end up cementing himself as a standout key defender who thanks to that role made the WAFL Team of the Year and played in the WAFL State Team.

Claremont now is preparing to play South Fremantle in Sunday's preliminary final at Fremantle Community Bank Oval with the winner to advance to the Grand Final against Subiaco next Sunday at Optus Stadium.

Given the hard work and steady progress Claremont has made the last three years with Darren Harris as coach, Hamp is taking nothing for granted with the chance to play in a preliminary final again and as much as he'd love to reach the Grand Final, he isn't looking beyond South Fremantle.

"It's a really good feeling to be back here again. The last prelim I played in was against East Perth in 2013 at home and that was after we lost the second semi to West Perth by four points so those memories have hurt for a while," Hamp said.

"I guess in Harro's first year it took us a while to find our feet and we didn’t make the finals, and then last year in the back half of the season we started to play some really good footy.

"And this year we managed to start off really well to set us up nicely and we've been trying to build a good brand since then which has worked pretty well to now get us into this position to be one game from a Grand Final.

"Then if we are able to win on Sunday, we would think we are good enough to win the Grand Final but the reality is we have a really tough opponent first in South Fremantle that we have to get through first and we can't afford to think ahead of that at this stage."

Hamp might have had the back end of his season interrupted by an ankle injury and even a surprise stint back up forward, but the 2019 season could still very well be the best of his career to date.

Now as a 144-game veteran with the Tigers, he is knocking on the door of life membership should he play on in 2020 and based on current form, it would be a shame if he didn’t continue on.

He was the outstanding key defender in the competition in the first half of the season leading to his selection both in the WAFL State Team that played South Australia and then ultimately in the WAFL Team of the Year.

While the ankle injury and time forward threw him off a little, now coming into the preliminary final he is feeling good again.

"In the first half of the year I was probably feeling really confident in what my strengths were and what I could bring to the team, and I just went out there every week to try and play to my strengths," Hamp said.

"I was feeling really good about my footy each week and then a few factors led me to going forward for a couple of games and I was happy to do that to fill a hole in the team.

"Then unfortunately the ankle injury happened which threw me off for four weeks there and I've been trying to come back from that for the last couple of weeks. I'm starting to settling back into it now."

With South Fremantle and Claremont having played in Round 19 and then in the qualifying final, they are certainly well familiar with one another heading into Sunday's preliminary final and it will be third straight meeting also at Fremantle Community Bank Oval.

Looking back on two weeks ago and Claremont fell 39 points down midway through the third quarter before finishing strongly to only lose by seven points.

The focus this time around will be on starting better with a Grand Final at stake while Hamp sees no reason to focus on South Fremantle being in their fourth successive preliminary final.

"We've played twice now in the last month and our other game wasn’t too long before that either so both sides do know each other pretty well and it's just going to come down to whoever brings the better effort on the day I guess," he said.

"I think it was really all about the start of the game. They brought the pressure and the hunger for the contest more than we did and then we left it too late to start playing our better footy. We know we can't afford to do that again or else it will be the same result again.

"I don’t think it's something we'll talk about it all, if anything what it shows if they've played four prelims in-a-row they are a really good side, and we already know that. We have to be wary of them and we know they are going to be really hungry to get back into the Grand Final. But apart from that we don’t really need to think about what their mindset is at all."

Following that qualifying final loss, Claremont backed it up with a narrow six-point win over the West Coast Eagles in last Sunday's first semi-final to book in their preliminary final berth.

It's unlikely Claremont won that game without the inspirational act from co-captain Ian Richardson to put his body on the line to set up the eventual winning goal.

The consequence was a broken collarbone but Hamp has never seen anything so inspirational on a football field he's been on.

"It's probably the most inspirational thing I've ever seen on a footy field that I've been playing on. It's extremely inspiring for us all heading into this week knowing that if our skipper is willing to do something like that, then everyone else should try and bring that type of effort," Hamp said.

"We might not be able to do what we did, but we should try and play even harder for him given he won't be out there. As for any chance of him playing the Grand Final, I have absolutely no idea what a timeframe is on a collarbone so it might be unlikely as much as we'd obviously love having him out there."

Now that the preliminary final is almost upon him, Hamp is taking the approach of trying not to think too much about it in the lead up before switching on come Sunday morning.

"Personally I try not to think about it too much the day before and I just try to take my mind away from it as much as I can so I don't get too worked up or stressed about it," he said.

"That way I'm feeling nice and mentally fresh going into the game the next day. I'll probably start to think about what our focuses are a few hours before the game and switch on then."

While Hamp is entering the veteran stage of his career, the reality is he's still only 27 years of age and unless things change outside of football over summer, he is more than likely to be back with the Tigers in 2020.

"At this stage it's still a year to year proposition based on what my work commitments are, and things going on outside of footy," Hamp said.

"I'll see how it's all shaping up for next year at a later stage but at this point I think it's more likely than not that I'll play again next year. But it just depends I guess with what happens with work and family and all that."