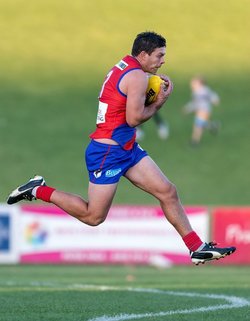 IT was emphatic wins for Subiaco, West Perth and East Fremantle in a condensed yet wet and windy Round 9 of WAFL action spread over Saturday and Sunday afternoons.

Coming off the WA Day Round, there was just the three games in Round 9 of the WAFL with Claremont, Peel Thunder, South Fremantle and Swan Districts sitting things out with the bye.

The first game of the round was a standalone fixture on Saturday afternoon with torrential rain and strong wins greeting Subiaco and Perth in a clash between first and third on the WAFL ladder.

The chance for the Demons to make a statement of their credentials in 2019 didn’t quite eventuate with the Lions significantly handling the conditions better and benefitting from kicking with the breeze in the first quarter to win, 11.13 (79) to 1.4 (10).

The other two Round 9 match ups took place on Sunday afternoon and the weather wasn’t too much kinder than 24 hours earlier in the first truly challenging round of the season in terms of weather conditions.

West Perth ended up proving too strong for the West Coast Eagles at Joondalup's HBF Arena, making it four wins from their past five games winning 11.6 (72) to 4.12 (36).

East Fremantle then made it three wins in their last four as well with a dominant performance against an East Perth who had been in good form, with the Sharks prevailing 13.11 (89) to 3.9 (27) at Leederville Oval.

It was perhaps the most anticipated game of the WAFL season on Saturday at Leederville Oval with the chance for Perth to show just how far it's come up against the might of Subiaco.

Perth started the season winning its opening five matches to suddenly have many dreaming of the fairytale story for the club that hasn’t played finals since 1997, in a Grand Final since 1978 or won a premiership since 1977.

But taking it up to Subiaco was always the biggest test of the season and the Demons got the first opportunity to do that on Saturday at Leederville Oval with all eyes on the contest with it the only WAFL game on for the day.

It proved a day to forget for Perth and that all began when captain Corey Yeo lost the toss and instead Subiaco got the advantage to kick with the strong breeze before the rain began to tumble down.

Going with the breeze and in the relatively dry conditions, Subiaco got rolling in the first quarter to kick five goals to one from Perth. The Lions' lead of 26 points at quarter-time would then never be challenged.

The at times torrential rain made life challenging the rest of the way and was at its worst in the second quarter with Perth only able to manage two behinds kicking with the advantage of the strong wind.

Despite the rain and wind making life challenging, Subiaco even managed a purple patch during the third quarter to end up kicking four more goals to head into there quarter-time with a 56-point advantage.

Rhys Waters and Ryan Borchet both did well in the conditions to kick three goals each for Subiaco with Lachlan Delahunty a dominant force with 36 possessions, nine marks, 21 hit outs and two goals.

Clint Jones was playing his 150th game in the WAFL, 84 for South Fremantle and now 66 with Perth, and fought hard for 28 possessions with Corey Yeo picking up 27 touches, Cody Leggett 26, Brant Colledge 26, Matthew Taylor 23, Michael Sinclair 17 and Jacob Payne 17.

West Perth bounced back well from a WA Day Derby loss to dominate the West Coast Eagles after quarter-time to win by 36 points at Joondalup's HBF Arena on Sunday afternoon.

West Perth was coming off a loss on WA Day to East Perth at Leederville Oval but prior to that the Falcons were in terrific form winning three straight after opening the new season with four successive losses.

Meanwhile, the Eagles made the trip to HBF Arena for the first time on a four-game losing streak and things got no better for them against in their first ever clash with the Falcons.

Both teams kicked a goal apiece in the first quarter before West Perth kicked away in the second term with four goals to one to hold a 17-point advantage by half-time.

The Falcons extended their lead further with two goals to one in the third quarter, and really rammed home their dominance in the final term with four more goals to one to win 11.6 (72) to 4.12 (36).

The win sees West Perth rise to fifth position on the ladder with a 4-5 record while West Coast slips to last place at 2-7 having lost five straight.

Keegan Brooksby was also a dominant presence in the ruck with 22 disposals, eight tackles and 48 hit outs.

It was East Perth who entered its clash with East Fremantle in the better form but the Sharks produced their most emphatic performance in a long time on Sunday afternoon to beat the Royals by 62 points.

East Perth had been playing well in recent weeks including beating West Perth on WA Day, only losing to South Fremantle on the last kick of the day and beating the West Coast Eagles, but they couldn’t keep it going against East Fremantle at Leederville Oval on Sunday afternoon.

The Sharks were coming off a loss in the WA Day Foundation Derby to South Fremantle but prior to that had scored wins against Perth and Swan Districts having ended a 15-game losing run that stretched back to 2018.

Conditions were tricky with the strong breeze and rain at times throughout the game, plus with Leederville Oval having already hosted Subiaco and Perth the previous day, and it was a relative tight opening term with East Fremantle narrowly leading by three points at the first change.

The 62-point win is East Fremantle's biggest victory since beating Subiaco by 80 points in Round 8, 2016.

The Sharks have only won 12 of 58 games since that win and Sunday's win against the Royals, not only because of the margin, could have been their most emphatic performance in that time.

Cameron Loersch threatened to dominate up forward for East Fremantle had he kicked straight in the windy conditions. He still had 2.6 from 15 touches and six marks.

Blaine Boekhorst continued to work back to top form after his 2018 knee reconstruction racking up 33 possessions, eight marks and a goal out on the wing at Leederville Oval.

Kody Manning made it a habit of terrorising East Perth when he played with West Perth, and continued that trend in an East Fremantle jumper with 18 touches and seven bone crunching tackles.

Mitch Dobson continued his good form for East Perth kicking two goals while Nathan Eaton kicked the Royals' only other major for the game.